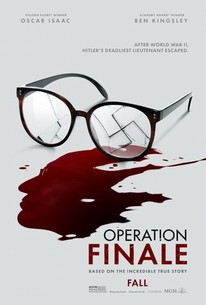 Critics Consensus: Operation Finale is well-intentioned, well-acted, and overall entertaining, even if the depth and complexity of the real-life events depicted can get a little lost in their dramatization.

Critics Consensus: Operation Finale is well-intentioned, well-acted, and overall entertaining, even if the depth and complexity of the real-life events depicted can get a little lost in their dramatization.

Critic Consensus: Operation Finale is well-intentioned, well-acted, and overall entertaining, even if the depth and complexity of the real-life events depicted can get a little lost in their dramatization.

Fifteen years after the end of World War II, Israel's intelligence agency Mossad and security agency Shin Bet - led by the tireless and heroic agent Peter Malkin (Isaac) - launched a daring top-secret raid to capture the notorious Eichmann (Kingsley), who had been reported dead in the chaos following Nazi Germany's collapse but was, in fact, living and working in a suburb of Buenos Aires, Argentina under an assumed identity along with his wife and two sons. Monitoring his daily routine, Malkin and his operatives plot and execute the abduction under the cover of darkness just a few feet from Eichmann's home. Determined to sneak him out of Argentina to stand trial in Israel, Malkin and Eichmann engage in an intense and gripping game of cat-and-mouse.

Kin Is an Unsatisfying Genre Mash-Up

Despite its engaging performances, this real-life story about Israel's hunt for a war criminal moves through rote plot points with uninventive efficiency.

Ben Kingsley's serene, "everybody sh*ts" reading of the character is a source of illumination around which everything else in the picture revolves.

The markings here are of a fiery potboiler, but "Operation Finale" never ignites.

It's in the movie's lengthy middle sequence of verbal sparring between Malkin and Eichmann that Operation Finale comes into its own.

The film works as a history lesson, a mission movie, and a story of the heart-breaking aftermath of an immense tragedy.

This is a perfectly competent, steadily entertaining film.

Operation Finale, skillfully directed by Chris Weitz, and driven forward by another superb score by Alexander Desplat, is crisp and absorbing and satisfying, both as a thriller and as a moral drama.

"Operation Finale" may be admirable and noble, but so are the documentaries on A & E. This one needed to be more than just a good history lesson. It needed to be a great thriller.

It's a powerful story, rife with tension, but the pace is uneven and we thought the acting too understated.

[Operation Finale] reminds us that ultimate justice, true 'finale' judgment, is not up to us or even possible in this life.

Like Argo (and no doubt countless others Iï¿ 1/2(TM)m unaware of), but with nazis and without the elaborate facade. Of course, Argo was a well-respected and well-received film upon initial release and part of me has to wonder whether Operation Finale suffers from having so recently experienced such a similar and more charismatically executed version of this story or if I really do need to go back and watch Argo with fresh eyes. Has my taste really progressed and expanded that much in six years? Besides causing some self-exploration though, Operation Finale is a perfectly competent thriller that lacks any sense of grandeur or artistry that makes it worth seeing on the big screen. The top-tier casting is here with Oscar Isaac and Ben Kingsley relishing in their testy dynamic, Nick Kroll shows off heï¿ 1/2(TM)s very much interested in doing work as he gets a more prominent role here than he did in Loving while Mï¿ 1/2 (C)lanie Laurent is largely and unfortunately wasted. It also took me some time to recognize Joe Alwyn of Billy Lynnï¿ 1/2(TM)s Long Halftime Walkï¿ 1/2(TM)s, but the young actor does a notable job of pulling the viewer into his charming character before realizing what side of the line he falls on (the kid is one to watch this fall too given heï¿ 1/2(TM)s netted roles in Mary Queen of Scots and The Favourite). The tension throughout the entirety of the third act is expertly crafted as well and there are some genuine white knuckle moments, but by the time the credits begin to roll there is a stern sense of appreciation without the film holding the stern sense of influence one might imagine to linger given the powerful true events the film is based on.

Operation Finale is one of those kinds of movies that is just good enough to make me wish it had been better. It's based on the true story of an Israeli team of spies that located Adolph Eichmann (Ben Kingsley), one of Hitler's lieutenants who authored The Final Solution. He's been hiding in Argentina for years and giving public lectures, which isn't helpful with keeping a low profile. Oscar Isaac (The Last Jedi) leads the Israeli spies as they plot to kidnap Eichmann, get him to admit his guilt for the Holocaust in writing, and smuggle him out of the country and to Israel to stand trail for the deaths of millions. This story should be exciting, it should be fascinating, it should be compelling, and for stretches it can be, but Operation Finale errs in capturing Eichmann too quickly. The majority of the film is the spy team holding him in a secret location and interrogating him, while the surprisingly Nazi-coddling police force of Argentina hunts for their location. I'm assuming the filmmakers were accurately telling the true story, but you start to question why the spies are taking their sweet time. Why not get on a boat as soon as possible and sail to another country to fly away, one less friendly to former Nazis? There aren't really any set pieces where their cover might be blown. It's mostly Isaac talking with Kingsley, and while their conversations are entertaining, it's yet another preview of a better movie that we're never going to have delivered. The film lacks enough urgency. The characterization is too limited and the supporting characters are more faces than people; Melanie Laurent essentially plays The Woman Spy. Operation Finale should have either spent more time on the specifics and complications of nabbing Eichamann, presenting a challenge, or it could have accentuated the debate between Isaac and Kingsley over the nature of culpability, rationalization, guilt, and vengeance. There's probably a really good Nazi-hunting mini-series or Nazi-debating play in here. Either way, the actual finished film is well made, well acted, and well intentioned but also dramatically lacking. Nate Grade: C+

Looking for another historical drama that makes you go "meh"? Darkest Hour and The Post have successfully passed the torch to Operation Finale. If you were to ask me who would be my first pick to direct a film about the post-WWII hunt for Adolph Eichmann by Mossad, I would immediately go with Chris Weitz, the guy who directed The Twilight Saga: New Moon. Well nobody asked me, and I still got what I wanted. Believe it or not, it's not as bad as one would expect with him at the helm, but I'll be baffled if it comes up during awards season. What am I saying? Even All the Money in the World got an Oscar nomination for a pinch-hitter supporting role. Oscar Isaac has recently been trying to crawl his way back out of several cinematic universes. What better way for him to spend all that cash he got robbing man-children by exploiting their nostalgia than by co-producing this small scale drama while playing lead actor and proudly wearing his heritage on his proverbial sleeve? That might be a poor choice of words in this context. I think the ulterior motive was so that he could pilfer most of the one-liners, quips, and zingers from his more often than not comedic actor co-star, Nick Kroll. They must have had a hell of a time making this thing because for as somber toned as one would conceive the story of apprehending the "Architect of the Final Solution" being, this thing is about on par with a Joss Whedon movie. That would explain why the tone fluctuates haphazardly and why there's hardly a woman that's anything more than a plot aid in sight. Of course there's the superfluous romance subplot between Isaac and Melanie Laurent. Her reputation for hunting Nazis precedes her, but here she's more of a back seat babe amongst the ragtag Israeli spy crew. God forbid they stick to the espionage or the audience might get bored! Ben Kingsley gives a strong performance (as always) as the infamous Eichmann, and for the majority of the run time they do their best to make him seem like a reasonable, even sympathetic character. But we all know Nazis are ravenous ideologues, and their dastardly nature amps up scenes that initially seem more tedious than tense. It's interesting in a way that it would make a high school social studies class period whiz by, bar the one obligatory PG-13 F-bomb.