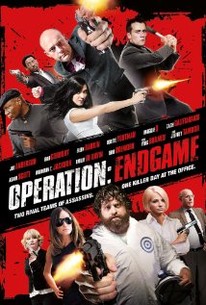 A satirical workplace comedy with a slick action twist, Fouad Mikati's Operation: Endgame explores the violence that erupts when the organization charged with protecting America implodes, and the employees turn their guns on each other instead of their enemies. Somewhere beneath Washington, D.C., an intense rivalry is heating up between two opposing teams of government assassins. The hired killers in the organizations take their names from Tarot cards. The Fool (Joe Anderson) is the latest recruit. Reporting for his first day on the job, The Fool is shocked to find that his boss is dead, and the office is on lockdown. To make matters worse, the building has been rigged with explosives, and it's going to blow soon. Now, in order to get out alive, The Fool will have to root out the killer in his midst, and make a quick escape before his co-workers catch him in their crosshairs. Ellen Barkin, Zach Galifianakis, Rob Corddry, and Jeffrey Tambor star. ~ Jason Buchanan, Rovi

This terrifically populated but supremely dumb action comedy will be a hell of a lot of fun when you happen across it on late-night cable.

As the body count climbs and a pair of bickering surveillance guys watch in jaded fascination, the director, Fouad Mikati, reveals himself to be far more competent with blunt trauma than subtle interaction.

If the script ... spent as much time on character development as it did concocting its raft of explicitly vulgar putdowns, it might have had some actual flesh on its bones.

Operation: Endgame is a film more about the journey than the destination. Forget that the film has a real plot and focus in on the brutally hilarious one-liners, snarky sarcasm and biting cynicism the film oozes in the first half.

It's a splattery diversion, but it's neither funny nor profound. It's just ugly, wasting a game cast looking to beef up their resumes with a little ultraviolence.

A satirical workplace comedy with an action twist. A dark, edgy and wild as hell blast of a film. A wickedly entertaining and savage comedic-thriller that's just as much of as an action film that's filled with great humor and great action. It's stylish, slick and exceptionally crafted. A terrific cast of actors who all look like they are having great time in this film. One of the brightest and most original genre films of 2010. A brutally hilarious, sharply suspenseful and action-packed movie. It packs some cool twist that keep you guessing. A tremendously enjoyable way to spend 82 minutes. Rob Corddy is outrageous and terrific. Ellen Barkin is sexy and tough as nails.

The action is pretty mindless, but the movie is really more comedy than anything else. It seems like a typical day at the office, until something goes terribly wrong and suddenly everyone starts killing each other. Though still cracking jokes and making sarcastic banter. It's written and performed well for the most part. Aside from a couple of exceptions, the impressive cast list only play bit parts. Don't expect to see much of Ving Rhames or Zack Galifianakis, for example. I was disappointed what I wished Maggie Q's character should have survived at the end, but she didn't.

Cast: Joe Anderson, Odette Yustman, Adam Scott, Zach Galifianakis, Emilie de Ravin, Maggie Q, Ving Rhames, Ellen Barkin, Bob Odenkirk, Rob Corddry, Jeffrey Tambor Director: Fouad Mikati Summary: When a government assassin known as The Fool (Joe Anderson) arrives at a classified underground facility for his first day of work, he discovers the boss has been killed. Now, he must uncover the murderer before they all lose their jobs -- or their lives. My Thoughts: "It was a simple fun action film. Had lots of good fun fight scenes with some really unique killing styles. It's literally just chaos all the way through. Rob Corddry brought the laughs. Emile De Ravin's character 'Heirophant', was by far the craziest. That giggle she gives after a killing screams insane. She played it well. All the actors where great in this. The plot of the film kind of gets lost in all the chaos. But there is a good twist. It's worth the rental if your in the mood for a fun action comedy."

"Two rival teams of assassins. One killer day at the office." A battle ensues among groups of government spy teams in an underground facility after their boss is assassinated.

REVIEW
Operation Endgame, a satirical workplace comedy with a slick action twist is not without its flaws. The plot is convoluted, most of the dialog is incredibly silly and the whole thing isn't that funny. Having said that, the film is damn entertaining. The cast is composed, among others, by Zach Galifianakis, Emilie de Ravin, Maggie Q, Rob Corddry, Ellen Barkin ,Bob Odenkirk and Ving Rhames. There's plenty of star power here but, while some of the actors were delightful, others were completely underused. Being a battle royale of sorts, the deaths kept piling up and therefore some brilliant actors like Bob Odenkirk had very little screen time. In the end, it's all about what you're expecting. Operation Endgame is no Oscar contender. This is mindless fun with a bit of action and gore in the middle and the film clearly doesn't take itself too serious and in my opinion it succeeded in what it intended to do which is, to entertain.