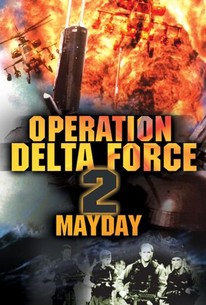 In this action thriller, a group of terrorists take over an ocean liner with 3,000 passengers on board, but what the bad guys don't know is that the captain of the ship is one Halsey Long (Dale Dye). The good captain's son is Skip Long (Michael McGrady), leader of the crack anti-terrorist squad the Delta Force, and while under any other circumstances he would be determined to bring the ship and the people on board back to safety, the terrorists have just made it personal. Operation Delta Force II: Mayday also stars Todd Jensen, Simon Jones, and Robert Patteri.

There are no critic reviews yet for Operation Delta Force II: Mayday. Keep checking Rotten Tomatoes for updates!

There are no featured reviews for Operation Delta Force II: Mayday at this time.