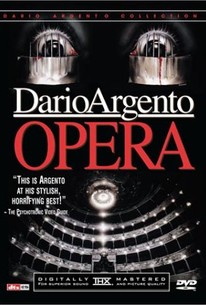 An obsessed fan stalks a young opperata and kills those who are closest to her.

Opera is always heading backwards to move forwards, and ends, bizarrely, with its heroine crawling in joyous derangement amidst the primordial plants and critters of the natural world, in an ultimate act of atavism.

Allowing us voyeurs to watch from the stalls as he demonstrates why he's such a master of his art.

Opera sees giallo master Dario Argento working at his most gloriously OTT and this 1987 mystery contains all the traits you would expect from the Italian director: mystery, lust, violence and impressive camera work.

An exercise in extremity, always strongest when shunting things into overdrive.

For every gorgeously composed moment we see of the Macbeth live performances (inside an absolutely stunning opera house that I wish I could make into my very own lavish home), Argento in turn delivers up a merciless and savage death.

The color restoration is beautiful and Bluray shows off the color splendidly on home video. The singing is beautiful also. It is a pity the story was not more engaging.

Storytelling isn't much of a concern for Argento (it rarely is), but his gonzo interests remain flared up, enjoying one last romp armed with a reasonable budget and creative freedom, clearly relishing his time experimenting with operatic extremes.

Movies like Opera can be treasures for minds inclined to dip further into the shadows. They are reminders that terror begins with uncertainty, not with howls of obvious pain.

Italian horror master Dario Argento may have the most lopsided strengths and weaknesses of any director I've experienced.

An art film through and through, though it be an art film with an unusual number of bloody deaths... one of Argento's most memorable films.

Argento's masterful use of colors and music keep help to keep the film feeling fresh.

Released in 1987, Dario Argento's giallo thriller 'Terror at the Opera' perfectly blends the grandeur of the opera with his unmistakable brand of violence. Cristina Marsillach plays Betty, the beautiful understudy of a soprano who finds herself centre stage when the show's star is in an accident. With her newfound fame comes a cost, however, and Betty soon becomes entangled with a murderous stalker who forces her to watch him kill. 'Terror at the Opera' feels Shakespearian in essence, with ideas about love, obsession, and violence fuelling Argento's vision and immersing viewers in a world of tragedy and death. As well as this the film is very successful in building tension, utilising silence and unconventional camera-angles to great effect and keeping audience members on their toes, waiting for the patented violent Argento outbursts. When the violence comes its brutal and gripping, blood fills the screen and much like the film's protagonist, you'll find yourself unable to look away. The soundtrack is used perfectly and the mix of Opera, heavy metal, and 80s progressive rock perfectly suits the film's unpredictable nature. Despite everything it has going however for it the film feels overlong in its final 2 scenes, becoming somewhat ridiculous and taking away from the experience that preceded them. Verdict: an effective study of audience complicity and voyeurism, Terror at the Opera, despite being great, fails to live up to the high of Argento's earlier work 'Suspiria'.

If you're OK with the outlandish work of Italy's premier horror director-able to accept his outrageous story lines and flamboyant style-then you should have a great time with Opera. If you don't, then you won't. Cristina Marsillach plays Betty, a beautiful young opera understudy who is given a shot at fame (in an avant-garde production of Macbeth) when the star of the show is hit by a car. As any thesp who has 'trod the boards' will know, Macbeth is a production that carries a curse-and Betty soon discovers that the show in which she is now the star is no exception: a killer is systematically offing the staff at the theatre-and poor Betty is forced to watch by the sadistic murderer (who tapes needles under her eyes to prevent her from closing them!). With the help of a little girl who crawls through her air-conditioning ducts, her director and agent, and a few ravens who have seen the murderer's face (!!!), Betty discovers the killer's identity, and the truth about her mysterious past. Let's face it... Opera is one crazy film, with its preposterous plot-turns, convoluted death scenes, and an ending that beggars belief. And whilst director Dario Argento has never been one for, shall we say, conventional story lines, this particular giallo is so daft, and features so many of his trademark stylish touches (all ramped up to the max), that it's almost as if, with each successive film, he is seeing what he can get away with (at times almost parodying his earlier work). This is exactly why I find the film such fun!!! Argento's camera movements are absolutely incredible: gliding, creeping and, in one amazing scene, even swooping around the opera house above the audience; the power of Verdi's music is combined perfectly with the synth majesty of Claudio Simonetti's score, providing a suitably grandiose accompaniment to the sumptuous visuals; and several outstanding set-pieces (featuring Sergio Stivaletti's nauseating gore FX) go to prove that no-one does death better than Argento (check out one character's stunning demise, in which a bullet passes through a spy-hole in a door in slow motion, and straight into their eye!).

I really couldn't decide whether or not I liked this movie. I mostly liked it: Argento's style is evident, there are a lot of great special effects, and cool music. The story starts out interesting, but then there are a bunch of crazy plot twists, most are confusing too. Overall, it could have been better.

Dario Argento's Opera is a fine return to the maestro's earlier films such as Deep Red. Argento follows Tenebre, another Giallo Horror film with this tale of murder. Opera is considered by many diehard Argento fans, including myself to be the maestro's last great film. In the 1990's he's started to have a rocky career, Argento became hit and miss. Opera is an impressive film, and one that can sum the best of Argento's previous Giallo films. Opera is well crafted Horror film and Argento utilizes all his traditional elements to create this intense film. Of course like every Italian Horror film, the story lacks a bit, but the thing that sticks out the most are the visuals of the film. And for visuals, Argento has always been top notch and for this film, he delivers something chilling. In pure Argento fashion, the film takes its time to steafily build the pace and not too much is given away. The first murder happens about twenty minutes in. Opera is a well paced horror chiller, and it's a fine last "great" film for Dario Argento. His 90's work such as Trauma was good, but too Americanized, and it lacked the wit and style that Argento explored in earlier works such as Deep Red. In pure Argento style, the soundtrack is mainly Heavy Metal music (An Argento trademark by now) The cast do a great job at creating something truly terrifying on screen. This is one of the best Argento films of the 1980's.