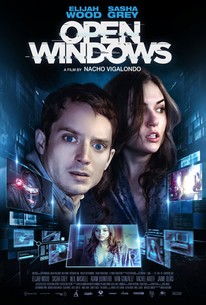 Nick is excited to discover that he's won a dinner date with his favorite actress, Jill Goddard. But when Jill refuses to honor the contest, her manager Chord makes an offer he can't refuse: the ability to view Jill secretly via computer. Nick begins watching the unknowing star on her webcam, not realizing that this decision will put both himself and Jill at risk as they enter a terrifying world of cat-and-mouse where nothing-and no one-are as they seem.

Miguel Noguera
as Man on TV

It's nonsense, but it's glorious nonsense.

Before the tedious and convoluted cyber-thriller "Open Windows" is said and done, you may feel like jumping out of one.

A thriller with so many viewpoints, feints and fake-outs that it swiftly disappears up its own URL.

The combined concepts are so high that the film resolves as Vigalondo reaches his Icarus moment, the corpse so mangled and unpleasant the project's ambition can only be identified via dental records.

The gimmick plays well from a technical standpoint, but the story requires a suspension of disbelief that only genre diehards are likely to give.

Open Windows is a stretched out gimmick, one hiding its predictability in its flashy visual innovations.

If you can muscle past the plot weirdness, you'll find a movie with a strong insight into celebrity culture in the Internet age.

Director/writer Nacho Vigalondo has crafted a clever storyline that keeps us engaged throughout.

Open Windows is entertaining, but the plot makes very little sense and is astronomically unbelievable past the first 30 minutes.

Vigalondo is a talented filmmaker, but this thriller is perhaps a little too ambitious with an execution that doesn't convey all of his big ideas in a way that's cohesive and consistent.

Only by the film's final third does it realize the proper sense of escalation.

I don't know what to make of this movie, since I am quite a fan Nacho Vigalondo and the fact that he has a good eye for creating genre films. And, admittedly speaking, this movie is quite ambitious. It has some good ideas on the nature of celebrity and some fans' obsessions with their favorite celebs and how that obsession manifests itself in unhealthy ways. That's what this film is about essentially. Of course, the way they get there is really where the faults lie. Nick, Elijah Wood, is a big fan of Jill Goddard, Sasha Grey, an actress. Nick wins a contest where he would get to have dinner with Jill. While he's waiting at the hotel, a hacker, or something, contacts him and informs him that the date has been cancelled by Jill. Then this hacker manages to get Nick to do everything he wants him to do. This includes tying up Jill's agent in his room, using said agent in order to get Jill to strip on webcam. There comes a point in the film where the hacker kidnaps Jill. Nick, enlisting the help of another group of hackers, tries to help Jill escape from her situation. Everything until this point is, actually, pretty good. It didn't offer anything great, but it was a fairly solid cat-and-mouse thriller. Then everything goes straight to shit. Perhaps that's a strong phrase to use, but the film does become very highly convoluted and preposterous. Not that preposterous is bad or anything, of course, anything can work if you have a strong script. And Nacho Vigalondo had a lot of ideas about the obsession with celebrities and I felt that the movie should've just stuck with that. But, unfortunately, there's another hacker involved in the proceedings that was believed to have been murdered by the villain, but he actually survived. Pretty sure you can figure out what the twist is going to be if you've seen more than five films. This is where the film really lost me. It's not that it doesn't make sense, it's just that the way it is written and elaborated on leaves a lot to be desired. It's all over the place and it doesn't really manage to make all its plot elements click into one coherent whole. The tech stuff also looks corny. Remember how Hackers, the film, made hacking look cool as shit but it actually had nothing to do with reality, that's how this film makes hacking and the tech they have look like. It's not as 'cool' as it was in Hackers, but the principles are the same, it's not based on reality. So, to me, that was actually one of the lamest parts of the movie. The acting is decent. Elijah Wood is good, but Sasha Grey didn't do a lot for me. I guess that, for a former adult actress, she's better than average, but she's clearly not a good actress by regular standards. Maybe I'm being a bit harsh, she'll do fine in genre films like this, but she's not gonna set the world on fire in films where she actually has to rely on her acting talents to carry a film. I really disliked the third act of the film, it just undid everything. Like I said, everything prior to the reveal there was another actual hacker that was murdered, was good. The cat-and-mouse chase of Nick trying to get to where the villain is in order to save Jill is all good. Everything at the hotel, prior to Nick getting in his car and leaving was also good. The third act was just a mess. And it's not even a hot mess like Age of Ultron was. It's just a mess that really ends up hurting the flick. I was gonna give this 2.5 stars, but it's really a 2-star affair. Nacho Vigalondo had some interesting ideas and he does get to showcase that, but all that goodwill is destroyed with a nonsensical and, quite frankly, annoying third act. I can't recommend this. It's on Netflix and you could do worse, but you'll probably come out of it really disappointed.

I think I am so cross with this because it started out reasonably well for what it is. Geeky website owner wins a date with the girl of his dreams who is web site is all about. In his hotel room, he receives a message from a guy claiming to be from the team responsible for his prize and letting him know that the young actress, Jill, has refused to show and that she actually has a history of bad behaviour and isn't so nice. The caller indicates he is fed up with Jill's attitude, and as compensation he tells the geek he will do some hacking which allows him to spy on Jill online for the evening. The format of the movie is all shot through the computer and other recordings such as a video camera. It's been done a few times recently, but still something a bit different and the premise seemed interesting. At about 50 minutes in it felt like the movie must be finishing soon. Really wish it had because the longer it went on, the less I cared. Talk about losing the plot. I'm still not sure about the confusion twists at the end, and worse, I don't really care that I didn't get it. Annoyed I spent money and time on this mess. Now to find somebody on eBay to offload it on...

The plot is smart and Vigalondo's direction following multiple open windows on a computer is imaginative and well conceived, but he also seems too desperate to make it ingenious, and so the film starts to devolve into a convoluted mess of twists close to the end.

Intense and exciting, Open Windows is a dynamic psychological thriller. After receiving a mysterious call an obsessive fan is given unrestricted access to an actress's phone and laptop, but he soon finds himself caught up in a deadly game that spirals out of his control. Elijah Wood gives an incredible performance, and Sasha Grey also proves to have some talent. Presented in real-time and going in and out of multiple video streams on a computer screen, the unique directing style helps to bring an intensity to the scenes. Open Windows is an extraordinarily daring film that is full of suspense and intrigue.