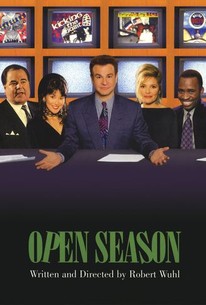 Big business dealings, competition, and TV ratings wars are satirized in this biting comedy. Stuart Sain is an egotistical, over-ambitious Jewish executive. He works for Fielding, a company like Nielsen which uses small boxes to garner TV ratings statistics. Stuart is married to Cary, a psychologist. In the opening scenes, the GPN, which has been number 1 for over 10 years, is opening it's new season of drug oriented TV shows. After watching a televised special about Fielding, Sain gets mad and his promotion prospects are grim. He leaves his company and accepts a public relations position from Rachel Rowen, the pc head of PBT, the public television network. Rachel, like her commercial competitors is totally obsessed with being number 1. Her network does seem to be garnering a huge share of Fielding ratings. That may have something to do with the fact that their boxes are malfunctioning.

Bob Costas
as Himself

Regis Philbin
as Himself

Tony Guida
as Himself
View All

There are no critic reviews yet for Open Season. Keep checking Rotten Tomatoes for updates!

There are no featured reviews for Open Season at this time.