Only Angels Have Wings1939 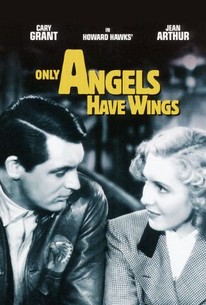 Only Angels Have Wings Photos

This film takes place in the Peruvian Andes. Cary Grant heads a ramshackle airmail and freight service, forced to fly in the most perilous of weather conditions to the most treacherous of destinations. Facing death on a near-hourly basis, Grant and his flyers have adopted a casual attitude towards mortality.

Harry A. Bailey
as Tourist

Tessie Murray
as Tourist
View All

News & Interviews for Only Angels Have Wings

On DVD This Week: The Forest, Heroes Reborn, and More
Five Favorite Films with John Carpenter

View All Only Angels Have Wings News

Critic Reviews for Only Angels Have Wings

The flying effects, obviously, have dated, but everything else crackles with chemistry and class.

This is the quintessential Hawks movie, combining spectacular aerial sequences with the fatalistic barroom machismo of the pilots off duty.

It's a solid melodrama with a brawling sense of place that hasn't entirely stood the test of time.

It's a garrulous, effervescent movie - not my favourite Hawks picture, but very likable all the same.

'Only Angels Have Wings' uses its paper-thin plot as an excuse to mount a scalpel-sharp analysis of men under pressure: bitching, blaming and refusing to back down.

A director who's made at least twenty box-office gold mines since 1926 is going to repeat himself, but the fact is that Howard Hawks's films are as different as they're similar.

It's great stuff, silly and stirring and romantic, made at a time when thrills could be achieved without special effects and heroism conveyed with a few words or a shrug, and without an ounce of aggression.

"Only Angels Have Wings" is... wet, atmospheric, and even a bit tragic. These men live close to death, and, as such, have to live quickly. There is a sadness hanging over these people.

There are jokes and even real profundity, but they rise organically out of what may be Hawks' greatest, shaggy dog-iest masterpiece - maybe the most easy-going great film ever made.

a delight in the way it supplies drama and suspense via the dangers of flying in remote South America with the humor and romance of opposites attracting.

[It] soars, not least during its incredibly taut bad-weather flights which pound with the slow thudding tension akin to the depth-charges of Wolfgang Petersen's Das Boot.

Audience Reviews for Only Angels Have Wings

Cary Grant leads a tight ensemble of mail pilots in the Andes Mountains for whom frequently bad weather conditions turn every regular day of work into a dance of death. Somehow Jean Arthur gets off the boat and gets involved with the guys first and then with Grant. Much of this doesn't make sense or add up and yet the presentation is so atmospheric and well done that damned if one doesn't hang around for the ride. Rita Hayworth, in her first A picture, sizzles even then.

It's a film about adventure and romance, but what we really have here is a study on the nature of death by director Howard Hawks. A lone adventuress (Jean Arthur) steps off the boat in a tiny South American banana port, and makes quick friends with some lonely american pilots working for the local mail company. It's a friendship that ends all too suddenly and all too violently. But where she would shed tears for a soul lost to dust, his fellow pilots choose to sing songs and even laugh it off, as death could come for any one of them at any time. The dashing head of the crew (Cary Grant) is perhaps the most cavalier of the group, but then, he has to be, as he's the one who sends them out (possibly to their deaths). She's attracted to him, and he to her, not as some flighty dame, but as a real woman who knows how to value life. But it becomes her task to convince him that she won't try to change him like his last love (Rita Hayworth) did, and he must make the effort to want something, to want her, for more than a passing fancy. He, who never owns so much as a book of matches, feeling it's too much of a commitment. In the face of the constant threat of death, maybe this all seems unimportant, or maybe it's the only thing that IS important. Maybe that's the heart of the matter, the issue of what this life is all about and what are we doing here and why are we doing it. There is a scene towards the end of the movie, a pilot is going on "one last flight", and it's one he must make alone. It's the elephant in the room, the fact that everyone knows, but no one wants to say aloud. That we all must one day die, and that we will die alone. The light will die within us and the mystery of death will finally be revealed. It may be wrong to fixate on our ultimate fate, but it's more wrongful still to deny that fate completely. Only Angels Have Wings is a microcosm of all our own little lives put together. We push forward and persevere in our work and loves in spite of our own mortality, because to do otherwise would be to negate our whole existence in the first place.

This is probably my favourite Cary Grant movie of the thirties. Jean Arthur, another favourite actor, stars alongside him in this. The movie combines adventure, drama, romance, and a bit of comedy. I loved this movie, and I highly recommend it.

Only Angels Have Wings Quotes