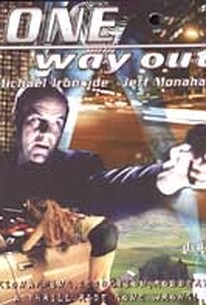 In this crime drama, two recently released prisoners, Frank and Bobby, get into more trouble when Bobby begins plotting one last bank heist and Frank starts plotting revenge against Walt, the thug who harmed his family. Deciding to team up, Frank and Bobby conspire to rob Walt's garage. Unfortunately something goes wrong and Walt gets iced. The two crooks then take a hostage and along with Frank's brother Snooky and Bobby's gal Evie hit the road to tragedy.

Critic Reviews for One Way Out

There are no critic reviews yet for One Way Out. Keep checking Rotten Tomatoes for updates!

There are no featured reviews for One Way Out at this time.

One Way Out Quotes