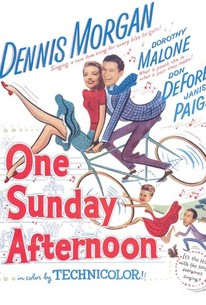 This third film version of James Hagan's stage play One Sunday Afternoon was directed by Raoul Walsh, who helmed the second adaptation (1941's Strawberry Blonde). This time around, songs have been added to accommodate the talents of Dennis Morgan and Janis Paige. Morgan stars as turn-of-the-century dentist Biff Grimes, who has spent the last ten years regretting that he hadn't married Amy Lind (Dorothy Malone), the girl of his dreams. Biff also harbors a grudge against Amy's husband Hugo Barnstead (Don DeFore), who was instrumental in getting Biff sent to prison on a fraud charge. Unbeknownst to his ever-loving wife Virginia (Janis Paige), who has stood by him through thick and thin, Biff schemes to exact an awful revenge on the two-faced Barnstead-only to discover in the nick of time that he's been better off all along because he didn't wed the avaricious Amy. Though consistently pretty to look at, One Sunday Afternoon pales in comparision to the earlier movie adaptations of the Hagan play, especially Strawberry Blonde, which had the added benefit of Jimmy Cagney in the lead. ~ Hal Erickson, Rovi

Critic Reviews for One Sunday Afternoon

There are no critic reviews yet for One Sunday Afternoon. Keep checking Rotten Tomatoes for updates!

There are no featured reviews for One Sunday Afternoon at this time.