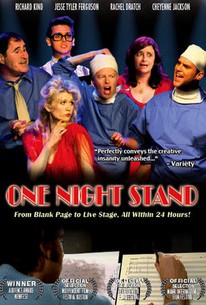 Synopsis: This fast-paced, hilarious and entertaining film follows Rachel Dratch (Saturday Night Live), Jesse Tyler Ferguson (Modern Family), Richard Kind (Argo; Seinfeld) Mandy Gonzalez (Wicked; In the Heights) Capathia Jenkins (Newsies; Chicago; Nine) and Cheyenne Jackson (Finian's Rainbow; 30 Rock; Glee) behind the scenes with other top Broadway and Hollywood writers, actors, and directors, as they produce four original short musicals, from blank page to live stage, all within 24 hours. As part of The 24 Hour Musicals event, teams of writers and composers who have never worked together before must create four original 15-minute scripts and score them overnight; at daybreak, actors and directors have only one day to rehearse and memorize lines, lyrics and dance steps for a one-night-only performance. Think A Chorus Line meets Project Runway - a window into the creative process--the spark, the camaraderie, the sheer panic and the ultimate thrill of expression. (c) Official Site

Critic Reviews for One Night Stand

Doesn't amount to more than a flimsy home-movie portrait of the creative process under time constraints.

Watching these people create on little or no sleep offers a delightful window into just how deep the talent pool still is for New York theater.

"One Night Stand" manages to illuminate something very real about theater, the way each craft contributes to the whole and the sense of community that can develop, even in a day.

There are no featured reviews for One Night Stand at this time.