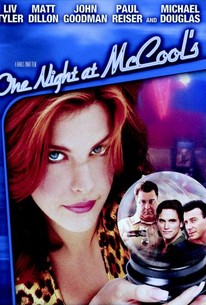 Critics Consensus: Critics say this blend of film noir and screwball comedy seems to think itself more clever and hip than it actually is. Also, the crucial femme fatale role needs a better, more mature actress than Tyler.

Critics Consensus: Critics say this blend of film noir and screwball comedy seems to think itself more clever and hip than it actually is. Also, the crucial femme fatale role needs a better, more mature actress than Tyler.

Critic Consensus: Critics say this blend of film noir and screwball comedy seems to think itself more clever and hip than it actually is. Also, the crucial femme fatale role needs a better, more mature actress than Tyler.

One Night at McCool's Photos

The debut project from co-star Michael Douglas' production company Further Films, this comic crime caper uses the narrative devices of multiple points of view and flashbacks, à la Rashomon (1951) and that classic film's many imitators. A late-night slaying at a bar called McCool's is the point of departure as Detective Dehling (John Goodman), bartender Randy (Matt Dillon), and Randy's lawyer-cousin Carl (Paul Reiser) project their fantasies onto the sexy Jewel (Liv Tyler), whose boyfriend (Andrew Dice Clay) is the corpse in question. As each man spills his guts -- Dehling to his priest, Randy to an aging hit man (Douglas), and Carl to his therapist (Reba McEntire) -- it becomes clear that the femme fatale Jewel has been manipulating the smitten men for her own purposes, namely a house full of cutting-edge electronic gadgets. One Night at McCool's is the debut American film from Norwegian commercial and music video director Harald Zwart.

Rosco DeSpain
as Bingo Player No. 1

Earl Carroll
as Bingo Player No. 2

Eric Ware
as Uniformed Cop at House No. 1

Gary Brussell
as Uniformed Cop at House No. 2

News & Interviews for One Night at McCool's

"Pink Panther" is Coming Back With a New Director
RT’s Top 20 Halloween Movie Countdown, Part 4
Critical Consensus: A Weak "Sentinel," So-So "Dreamz" Are Made Of This, "Silent Hill" Not Screened

View All One Night at McCool's News

Critic Reviews for One Night at McCool's

Oblivious to its own towering obsolescence.

The actors make the most of a predictable story line, and almost without exception the jokes are funny.

Feels like a needless, thankless, charmless shout-out to the '80s rock video.

There isn't much to McCool's that couldn't be found in an adult magazine.

Straining for a sense that a good time was had by all.

Disappointing, too violent, and not very funny.

...a breezy, nasty little film that delivers more than it promises.

No matter how bad a movie with A-list actors involved is, it will still be released - somewhere, sometime, to someone.

[Tyler] seems like she would be more at home playing a tomboy.

Once the gimmick has worn out its welcome, the movie makes misstep after misstep until a final shootout of baffling stupidity.

Audience Reviews for One Night at McCool's

A really bizarre blend of comedy and brutal killing. I was truly not expecting the turn of events in the movie. However, it falls short of actually having any purpose besides showing off Liv Tyler. It has it's moments, but in the end it is just a forgettable comedy.

Despite the pretty good cast and acting, this movie about a love-and-murder story told from different points-of-view is only average at best. I expected more and was seriously disappointed.

A dark version of There's Something ABout Mary, where all the guys fancy the same girl. Except Liv uses this to her advantage to get what see wants. Good cast.

Liv Tyler doing her best Jessica Rabbit impersonation stars as a vampy femme fatale who beguiles every man she meets by spontaneously turning into a photo shoot from FHM magazine, and wackiness ensues. A promising cast fail to save what is essentially a film noir spoof that unfortunately is totally lacking in wit and any measure of subtlety. What starts off as a kind of Elmore Leonard style comic drama suddenly becomes some kind of Rashomon (or Jackie Brown) homage in which the same story is told from three different perspectives, and ends up as tacky farce involving comedy bondage gear and a shoot-out to the strains of The Village People. It's heavy handed, vulgar and more than a little misogynistic, and you'd be far better served watching Grosse Point Blank or Kiss Kiss, Bang Bang instead.

One Night at McCool's Quotes