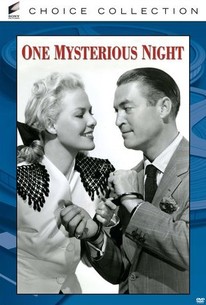 A nebulously sinister title disguises the fact that this is actually a "Boston Blackie" mystery, the seventh in Columbia's series. Reformed criminal Boston Blackie (Chester Morris) is accused of stealing the Niles diamond from a charity function. The police cut a deal with Blackie: If he'll locate the gem, they'll drop the charges. This time the cops go so far as issuing Blackie a police badge, which he uses with amusing abandon. One Mysterious Night, together with The Chance of a Lifetime (43) and The Phantom Thief (46), was given a non-identifiable title so that Columbia could coerce non-"Boston Blackie" fans into the theatre.

George E. Stone
as The Runt

Robert B. Williams
as Matt Healy

Critic Reviews for One Mysterious Night

There are no featured reviews for One Mysterious Night at this time.