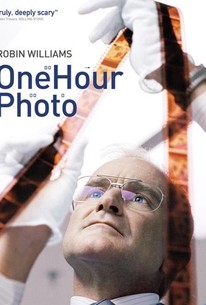 Funnyman Robin Williams steps out of character in this tense, low-key thriller that marked the feature-film directorial debut of music video veteran Mark Romanek. Semour "Sy" Parrish (Williams) runs the photo processing department at a large discount store; Sy is dedicated to his job, and takes great pride in his work. Sy's favorite customers are Nina and Will Yorkin (Connie Nielsen and Michael Vartan), an attractive and cheerful young couple with a nine-year-old boy, Jake (Dylan Smith). Sy dotes on the Yorkins and their son whenever they drop off film to be processed -- something they've been doing quite often ever since Jake was born -- and Nina and Will are indulgent of Sy's attentions, regarding his as a harmless eccentric. What the Yorkins don't know is Sy is a desperately lonely man with no real life of his own, and he's been obsessively making copies of their photos, for years, imagining himself to be "Uncle Sy," a member of the family. Sy's tenuous hold on reality begins to collapse when he develops a roll of film brought in by a new customer that suggests Will has been unfaithful to Nina; the notion that his ideal family may be falling apart is troubling enough for Sy, and when he loses his job, Sy reaches the breaking point. One Hour Photo was screened in competition at the 2002 Sundance Film Festival. ~ Mark Deming, Rovi

Michael Vartan
as Will Yorkin

Andrew A Rolfes
as Officer Lyon

News & Interviews for One Hour Photo

View All One Hour Photo News

Critic Reviews for One Hour Photo

One Hour Photo is a very well-made thriller. It shows us Robin Williams extending his acting range into unusual and disturbing material. And as well as causing acute anxiety in its last reels, it delivers a more moral message than most of its kind.

This immaculately made first feature from noted musicvid and commercials director Mark Romanek provides Robin Williams with one of his creepiest, atypical roles, and the comic star responds with an unusually restrained performance...

It has arresting things to say about how the family photo is used less to record than to project, and how far that projection can be from the truth.

Williams gives quite a performance. It's as if he's turned himself into a negative of his usual chipper self.

Sy's scary ordinariness is a species of acting stunt. There's no there there.

While honoring the suspense-building engine of a thriller, One Hour Photo creates a nightmare portrait of American life.

Robin Williams makes this movie what it is with his uncomfortably fearless portrayal of the wimpish Sy the Photo Guy, giving us the creepiest, most spine tingling, heebie-jeebie making film of the year.

A film that over the years I've come to appreciate far more than my initial viewing due to the brilliant, unforgettable effort by Robin Williams who gives one of his most haunting performances.

Without Robin Williams, 'One Hour Photo' is just another predictable B movie thriller. He's like that slow train wreck, personified, that people can't seem to take their eyes off.

Robin Williams gets a chance to stretch as an actor in this semi-effective thriller.

Audience Reviews for One Hour Photo

I can't believe the relatively low rating - this is a great movie. Probably the best role I have seen Robin Williams in. Very sad movie, especially towards the end as you start to understand Sy a little better.

Plastic-y feel to the movie which fits the mood of the movie. Incredible performance by Robin Williams. A movie that disturbs and crawls under your skin. Something not done too well in many films these days. Cinematography is picture perfect... something you would expect in a movie about a one-hour photo guy. Great movie.

Robin williams performs a role that should've deserved more praise. The story is meticulous about an overlooked art and gives us insight into the mind of a troubled man. Romanek's directing helped carry this thriller creepy all throughout the film until the last frame.

With arguably Robin Williams' best performance at the film's core, Mark Romanek's psychological thriller is creepy, riveting and intense throughout. It is also a very fascinating character study, as Williams' Sy is so complex and enters a land of madness by the film's conclusion. ''One Hour Photo'' is very underrated in my view and is extremely well-directed, shot and with an incredible performance by Williams.