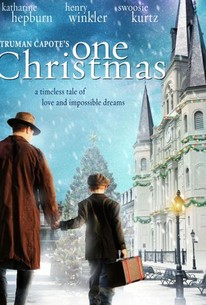 A young boy embarks on a holiday adventure with his estranged father in this poignant family drama starring Henry Winkler, Katherine Hepburn, and Swoosie Kurtz. Based on a short story by author Truman Capote, One Christmas opens in 1930, as eight year old Buddy (T.J. Lowther) leaves his aunt in Alabama to spend Christmas with his father in New Orleans. It's been years since Buddy has seen his dad, and these days the old swindler seems more interested pulling off scams than bonding with his long lost son. But the life of a con man has taken a heavy toll on Buddy's dad, and when you're entire world is based on lies, a little truth can bring the whole thing crashing down. As the hard-living grifter begins to realize the importance of cherishing every minute he has with the boy who looks up to him, young Buddy gets his Christmas wish to reconnect with the father he's never known, but always loved.

Bob Hannah
as Man No.1

John Henry Scott
as Man No. 2
View All

Critic Reviews for One Christmas

Katharine Hepburn's last film is a weak adaptation of Truman Capote's One Christmas.

Audience Reviews for One Christmas

There are no featured audience reviews yet. Click the link below to see what others say about One Christmas!