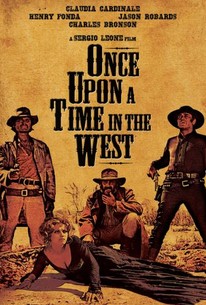 Once Upon a Time in the West Photos

In Sergio Leone's epic Western, shot partly in Monument Valley, a revenge story becomes an epic contemplation of the Western past. To get his hands on prime railroad land in Sweetwater, crippled railroad baron Morton (Gabriele Ferzetti) hires killers, led by blue-eyed sadist Frank (Henry Fonda), who wipe out property owner Brett McBain (Frank Wolff) and his family. McBain's newly arrived bride, Jill (Claudia Cardinale), however, inherits it instead. Both outlaw Cheyenne (Jason Robards) and lethally mysterious Harmonica (Charles Bronson) take it upon themselves to look after Jill and thwart Frank's plans to seize her land. As alliances and betrayals mutate, it soon becomes clear that Harmonica wants to get Frank for another reason -- it has "something to do with death." As in his "Dollars" trilogy, Leone transforms the standard Western plot through the visual impact of widescreen landscapes and the figures therein. At its full length, Once Upon a Time in the West is Leone's operatic masterwork, worthy of its legend-making title. ~ Lucia Bozzola, Rovi

Dino Mele
as Harmonica as a Boy

Spartaco Conversi
as Member of Frank's Gang
View All

News & Interviews for Once Upon a Time in the West

View All Once Upon a Time in the West News

Critic Reviews for Once Upon a Time in the West

Leone's newest effort, Once Upon a Time in the West, with a major cast and a lot of big studio money behind it, proves that he is simply a serious bore.

If there had to be a final Western, Once Upon a Time in the West would be it.

Moments of intense realism flow into passages of operatic extravagance; lowbrow burlesque exists side by side with the expression of the most refined shades of feeling.

There is something touching and maniacal about the two-and-three-quarter- hour result.

'Once Upon a Time...' now looks like an over-cooked mess of style, metaphor and reference.

Sergio Leone's 1969 masterwork, in which he pulls together most of the themes of his three Dollar films, and also contributes one of the most famous credit sequences in history, will wet your lips all over again.

I wish my words could convey just how wonderful this film is. But they can't. Sergio Leone was a poet with a camera.

...an exaggerated, fairy-tale variation on the Western, big bad wolf and all.

[Sergio] Leone creates a horseback epic of bad guys with a heart of gold and an iron engine that reshapes the landscape as its tracks are laid through the wilderness.

Is Sergio Leone's Once Upon a Time in the West (1968) the best western of all time?

Audience Reviews for Once Upon a Time in the West

Sergio Leone's ultimate Western is this glorious operatic elegy for the dying genre - a true masterclass in cinema filled with unforgettable scenes from beginning to end, endlessly quotable lines, an evocative use of silence, iconic performances and a sublime score.

Or ol'Sergio goes Hollywood, baby. Big and sprawling and dusty, this screaming Western-epic-western nearly looks as epic as it wants to be. And the stars are out for this too, like peanut shells under yer feet at a carnival, ready for their "Ima be famous!" trademark Leone close-up, only the rationale for the gist of this over long thing seems to be the least of Leone's worries, and that's too bad because by the ending, the bodies stacking up don't seem to matter much as we never really knew them much anyway. Why is everyone here on Rotten Tomatoes so enamored of this lesser Leone? Star power is my dubious answer.

Sergio Leone goes a long way with Once Upon a Time in the West. Perhaps too long.

Once Upon a Time in the West isn't exactly a race down the track and running 2 hours and 45 minutes doesn't help its cause. There are a lot of scenes that are drawn out, especially in the beginning, that do not need to be. Granted, the cinematography is solid, but story-wise it hurts. The film is nearly an hour in before it even feels like it starts to go somewhere.

The action is far and few in between. Sure, a Western, or any film for that matter, can live without bullets flying, but this picture needs it. The buildup is there; however, when the guns start shooting it is over as quickly as a bullet reaches its target.

The mystery and confidence behind Charles Bronson is fascinating, which leads to a fantastic character. Henry Fonda and Jason Robards do a good job of rounding out the trio of expert gunmen. Claudia Cardinale is a stunning presence that just grabs the eyes every minute she is on screen.

Once Upon a Time in the West has its moments and influences, but it also has its flaws. Watchable, if only once.

I'd maintain that westerns are not specifically my cup of tea, and I'd also maintain that, occasionally, I do enjoy them. Its music is remarkable, but the same can't be said for all the performances. If you too are running out of options, stop running.

Once Upon a Time in the West Quotes