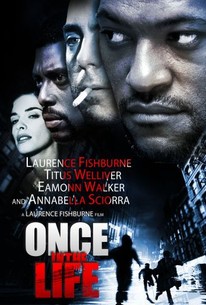 Critics Consensus: Once in a Life is a promising directorial effort by Laurence Fishburne. But the story is too conventional and similar to the many ghetto action/dramas that come before it.

Critics Consensus: Once in a Life is a promising directorial effort by Laurence Fishburne. But the story is too conventional and similar to the many ghetto action/dramas that come before it.

Critic Consensus: Once in a Life is a promising directorial effort by Laurence Fishburne. But the story is too conventional and similar to the many ghetto action/dramas that come before it.

Once in the Life Photos

Actor Laurence Fishburne makes his debut as a director in this urban drama adapted from his one-act stage play +Riff Raff. 20/20 Mike (Fishburne) and his half-brother Torch (Titus Welliver) bump into each other under less than ideal circumstances -- both are in jail, Mike on parole violation and Torch for theft. Torch is a heroin addict who has trouble financing his habit, so when Mike says he has a plan to make some quick money, Torch is more than eager to help. Mike and Torch try to swindle Hector (Andres "Dres" Titus), who works with his uncle Freddie Nine Lives (Dominic Chianese Jr.) as a bagman for drug kingpin Manny Rivera (Paul Calderon). While Mike and Torch are able to grab a large cache of heroin that Hector is carrying for Manny, the plan soon goes haywire and Hector and his men suffer heavy casualties. Mike and Torch go on the lam, while Manny's henchmen find Freddie and beat a confession out of him -- in which he names Mike and Torch as the thieves. Manny wants his money back and hires an enforcer named Tony (Eamonn Walker) to find Mike and Torch and get the cash. To insure that Tony doesn't waste time, Manny holds Tony's wife (Annabella Sciorra) captive until the money is returned. Noted jazz artist Branford Marsalis composed the film's original music score.

Madison Riley
as Precious
View All

Critic Reviews for Once in the Life

The film doesn't have a lot to offer that hasn't been done better -- and worse -- in hundreds of ghetto-sink shoot-em.

Billy's meltdown provides a real-time reality check, but for most of the time we're waiting for the payoff, and when it comes, I'm afraid, it's not very satisfying.

Talky in the best sense.

Fishburne is able to create such an effective balance between humor and anxiety that the movie survives its familiarities of character and language.

Would easily qualify for an Oscar nomination if it were in a movie that was a bit less like canned theater and more cinematic.

It reeks of staged theater: three men in one room talking endlessly.

The pingpong repetition of dialogue is more precious than poetic and heavy silences and actorly asides draw out a slim story that packs few dramatic surprises.

Never loses its identity as a work meant strictly for the stage.

Despite some pacing missteps, this well-acted and colorfully photographed film is a gripping, gritty look at a hard-knock Life.

Enough expertise has been lavished on this small film to make one almost forget that Once in the Life has been done more than once before.

The good news is that Fishburne also stars, and has recruited a talented group of actors to flesh out the cast; the bad news is that no one seems to have been on hand to help out with the rest of film.

Audience Reviews for Once in the Life

There are no featured audience reviews yet. Click the link below to see what others say about Once in the Life!

Once in the Life Quotes