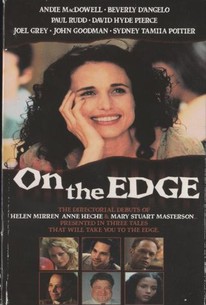 On the Edge Photos

First seen over the Showtime cable network on June 29, 2001, On the Edge is a compendium of three short science-fiction films, each with a decidedly feminist slant. The first segment, directed by Helen Mirren, is "Happy Birthday," in which a straight-A student (Sidney Tamilia Poitier) seeks recourse after she is "quota'd out" of graduate school. Next up is "The Other Side," directed by Mary Stuart Masterson, wherein a scientific genius (Anthony LaPaglia) clones himself upon learning that he has inoperable cancer -- only to find himself and his clone as two points in a romantic triangle. Closing out the program is writer/director Anne Heche's "Reaching Normal," the tale of a bored housewife (Andie McDowell) and her "telepathic twin," an eccentric college professor (Paul Rudd). The best of the batch is "Happy Birthday"; the other two stories are distressingly predictable. ~Rovi

John Goodman
as The Dean

Critic Reviews for On the Edge

There are no critic reviews yet for On the Edge. Keep checking Rotten Tomatoes for updates!

Audience Reviews for On the Edge

Quoting from IMDb: "On the Edge is about suicidal patients discovering their true selves while going through therapy in a treatment center." It's been quite a while that I watched some 'drama' genre movie. Call it my good luck or whatever, but this movie wasn't disappointing. The protagonist Jonathan of the movie tries to drive his car off the cliff, but fortunately or unfortunately, survived through it with no major injuries. After this incident, he chooses to be treated in a psychiatric hospital for 3 months to imprisonment as a sentence for his crime (stealing car + trying to commit suicide). There he's put under the care of Dr. Figure who isn't too competitive and accepts so. He puts him in a suicide group where he forms a bond with another patients, especially Rachel & Toby. It's the sarcasm of Jonathan, played by Cillian Murphy, that I enjoyed the most. Cillian Murphy appears complete natural and lives his character. His great performance is supported by equally mature performances from his co-actors: Tricia Vessey, Stephen Rea and Jonathan Jackson. If there's any part that disappointed me, it's the breakdown of Toby in front of Jonathan w.r.t. his brother. The lines could have been better written to have the necessary emotional quotient. The tears doesn't help much. Except that, there's not much to complain about from my side, and I surely find it recommendable. P.S.: I feel that others haven't liked this much or it hasn't received enough recognition, since the page for the movie did not exist on flixster when I came to rate it, and I'd to add it.

On the Edge Quotes