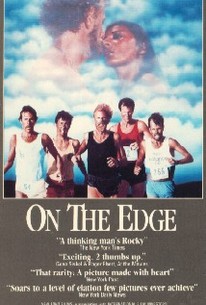 Looking none the worse for his age, Bruce Dern convincingly plays an amateur long-distance runner in On the Edge. Banned from American competition for violating his amateur status, Dern decides to prove he's still got what it takes. The middle-aged athlete enters the grueling Cielo Sea race, which has defeated many a man and woman half Dern's age. Our hero's obsession allows him to touch bases again with his former lover Pam Grier, his alienated father Bill Bailey, and his onetime trainer John Marley. It's Rocky for the rocking-chair set, but On the Edge is contagious in its euphoria.

Critic Reviews for On the Edge

On the Edge may have a familiar formula, but it is an angry, original, unpredictable movie.

Dern gives a moving performance as the beleaguered runner.

The real story is in Wes's mind, not on the trail, and frankly we spend to much time out there -- even if it is a sports movie at heart.

There are no featured reviews for On the Edge at this time.

On the Edge Quotes