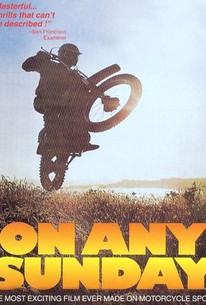 On Any Sunday Photos

With narration by co-producer Steve McQueen (who also races in some of its segments), director Bruce Brown (best-known for his poetic surfing documentary, Endless Summer) takes us into the incredibly varied and physically demanding world of motorcycle racing. Shot during a two-year period and edited from over 150 hours of footage, the film sets a new standard in motorcycle racing photography, and the film's action is enhanced by Dominic Frontiere's musical score. Along with other types of racing, Moto-Cross racing from the wilds of northern Canada (where wheels have two-inch steel spikes for traction in ice) to the Mojave desert is shown. While some European motorcycle racing is shown, such as the English Trials, most of the film concentrates on the American racing scene. Footage of the day-to-day life of McQueen, sportsman Malcom Smith and champion Mert Lawwill, as they participate in the racing circuit, helps to tie the film together.

Critic Reviews for On Any Sunday

It abounds with intelligently applied stop-frame, slow motion and colour treatment knick-knacks which heighten the excitement and visual impact.

"What kind of men are these?" Brown asks, and the answer comes not from what anyone says, but from the crazy, sensational motion of the film, which is, I feel, in its own way, a remarkable adventure.

[Bruce Brown] has made On Any Sunday," which does for motorcycle racing what The Endless Summer did for surfing and it's enjoyable in exactly the same way.

Clearly any enterprise that causes so many to abandon sanity so completely, even if only on a Sunday afternoon, deserves examination and On Any Sunday does the job extremely well and entertainingly.

Audience Reviews for On Any Sunday

There are no featured audience reviews yet. Click the link below to see what others say about On Any Sunday!

On Any Sunday Quotes