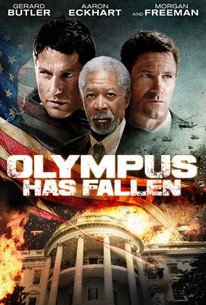 Critics Consensus: It's far from original, but Olympus Has Fallen benefits from Antoine Fuqua's tense direction and a strong performance from Gerard Butler -- which might just be enough for action junkies.

Critics Consensus: It's far from original, but Olympus Has Fallen benefits from Antoine Fuqua's tense direction and a strong performance from Gerard Butler -- which might just be enough for action junkies.

Critic Consensus: It's far from original, but Olympus Has Fallen benefits from Antoine Fuqua's tense direction and a strong performance from Gerard Butler -- which might just be enough for action junkies.

When the White House (Secret Service Code: "Olympus") is captured by a terrorist mastermind and the President is kidnapped, disgraced former Presidential guard Mike Banning finds himself trapped within the building. As our national security team scrambles to respond, they are forced to rely on Banning's inside knowledge to help retake the White House, save the President and avert an even bigger crisis. Antoine Fuqua (Training Day) directs an all-star cast featuring Gerard Butler, Aaron Eckhart, Morgan Freeman, Angela Bassett, Melissa Leo, Ashley Judd and Rick Yune. (c) FilmDistrict

News & Interviews for Olympus Has Fallen

View All Olympus Has Fallen News

Critic Reviews for Olympus Has Fallen

One of the most depressing and despicable films I have ever seen.

Olympus Has Fallen is made from action-movie mix. Just add sweat.

Reactionary fantasy, then - but what else are action films for?

Butler hardly knocks it out of the park, but he steals the film. And what a film...

You wonder exactly when and how Butler became today's accepted go-to action hero - and can something officially be done about it?

It rattles along with no little vim, and there is one excellent joke about the difficulty of finding a computer's hash key when time is tight.

It's all very busy but not especially exciting, and it does little to transcend what was doubtless its pitched tag as Die Hard Meets Air Force One.

Moving through the tropes as methodically as Banning through the rooms and corridors of the wrecked White House, this is well-paced and never boring.

For those who like this sort of thing-and I'm not a big fan of the jingoistic action genre-it does the job.

Olympus Has Fallen is a solid action film, and it hints at big ideas that make it something more than purely superficial entertainment.

However, Olympus Has Fallen is an overactive cliché-driven concoction that panders to the familiar "White House under attack" formula that we have seen countless times over. Olympus has indeed fallen...and in so many unimaginable ways possible.

Audience Reviews for Olympus Has Fallen

You gotta appreciate how incredibly violent and ruthless this is when it comes to the attack on the White House. The film, much like its villains AND protagonist, doesn't take prisoners. After the big attack things turn somewhat generic, though. There is a bit of a surprise here or there and the film remains entertaining but also relies on incredibly incompetent leaders. So it takes quite some suspension of disbelief to enjoy it, but the directing is pretty decent.

Typical actioner in that there is one man, our hero, up against a terrorist army ... and the terrorists, arrogant and cruel, don't know what we know, that they don't have a chance. Be prepared for the classic/obligatory scene wherein a hundred bad guys shoot at our hero and everyone of them misses, but every shot the hero fires back not only finds a target but does so spectacularly. Why do they make these? Because it's a fantasy that has not found bottom yet. People still buy the dream. Quite literally a dramatization of the old parental warning: "don't make me get up and teach you a lesson cause the learning's gonna hurt you." There's an interesting segment wherein a woman is tortured as badly as a man would be - glass ceiling break, baby.

Mike Banning: Classified? Really? Well right now, I think I have the proverbial need to fuckin' know. "When our flag falls our nation will rise." Olympus Has Fallen was better than I expected, but also as bad as I expected. It's not a good movie. It's full of patriotic propaganda that filmmakers for some reason love to use. As a simple popcorn flick, it's pretty fun though and as much as I dislike saying it, I enjoyed the movie for the most part. It has great pace and great action, and in the end that's all movies like this need. A secret service agent isn't able to save the presidents wife after a car crash and he is relieved of his duties and sent to a desk job. 18 months later, while the President meets with the prime minister of South Korea, North Korean terrorists overtake the White House and take the President and some other high ranking officials hostage in the White House bunker. Mike Banning, the aforementioned secret service agent makes his way to the White House and ends up being the only man left in there that is on the side of the United States. Now he has to fight his way through a shit load of terrorists in order to save the president and the country. Gerrard Butler definitely makes this movie go down easier. He's a lot of fun to watch, as always. If only he could pick better films. Butler plays a John McClain like character in a movie that can pretty much be thrown into the sub genre of Die Hard ripoffs. Morgan Freeman plays the Speaker of the House, who has to take over as acting president while the real president and vice president are unable to. Aaron Eckart plays the president and does a reasonably good job. As far as a recommendation goes, fans of violent, bloody actioneers will have quite a bit of fun. If you need something of more substance in the films you watch, you should probably look elsewhere. Overall though, this is a reasonably decent film that's a lot more fun that it probably should be.