Olive, the Other Reindeer1999 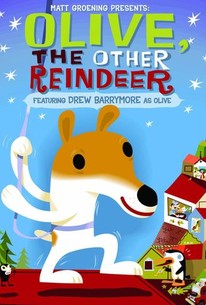 Olive, the Other Reindeer Photos

Matt Groening helped produce this animated adaptation of the popular children's book written by J. Otto Seibold and Vivian Walsh. Olive (voice of Drew Barrymore) is a little dog who is very excited about the upcoming Christmas holidays, and wishes she could somehow help Santa Claus (voice of Edward Asner) with his work. Word begins to circulate that one of Santa's reindeer has hurt his leg and won't be able to make the trip, and when someone mentions "all of the other reindeer," Olive mistaken thinks they've said "Olive, the other reindeer," and is convinced Santa wants her to come to the North Pole to help pull the sleigh. Dan Castellaneta, Peter MacNichol, Diedrich Bader, and Tim Meadows also contribute to the voice cast; Michael Stipe from the band R.E.M. voices one of the characters and contributes a song to the soundtrack.

Critic Reviews for Olive, the Other Reindeer

There are no critic reviews yet for Olive, the Other Reindeer. Keep checking Rotten Tomatoes for updates!

Audience Reviews for Olive, the Other Reindeer

To be honest, I thought this was quite ridiculous. It had a charm at times, but it was overshadowed by a pretty random plot with non-believable (and in some cases unlikeable) characters and a lack of focus.

As many will note, Matt Groening of Simpsons fame had a hand in this delightful animated film. It's about a dog that goes to replace one of Santa's reindeer. The animation is wonderfully simple. Often mixing CGI and traditional animation, creating an almost cut-out look. A wonderful voice cast also bring lifeand joy to proceedings, even if the songs are pretty much misses.

Olive, the Other Reindeer Quotes