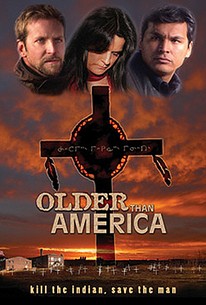 The truths of the past come to light in a series of haunting visions in this drama starring Adam Beach, Tantoo Cardinal, and Wes Studi. Traumatized by the strange visions that grow more vivid with each passing day, a young woman of Native American heritage begins piecing together a Catholic priest's diabolical plot to prevent her mother from revealing the atrocities that unfolded at a Native Indian boarding school. ~ Jason Buchanan, Rovi

Dan Harrison
as Walter Many Lightnings

Gloria May Eshkibok
as Mattie Moonshadow
View All

Critic Reviews for Older Than America

with its pedestrian direction, variable performances and perfunctory dialogue, this is more supernatural soap opera than probing chiller and its bland look... lends the film the undeniable feel of a movie-of-the-week special.

Older than American Sniper too. And despite Bradley Cooper turning up championing Native Americans, this First Nation telling it like it is thriller about neo-colonialist oppression by a Native female filmmaker has been buried all these years as well.

Audience Reviews for Older Than America

It's about 2% substance and 98% message, but I can see why that would appeal to some, it's just not really for me.