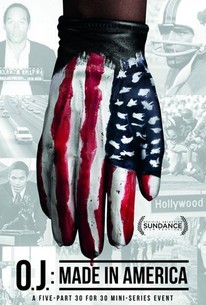 Critics Consensus: O.J.: Made in America paints a balanced and thorough portrait of the American dream juxtaposed with tragedy and executed with power and skill.

Critics Consensus: O.J.: Made in America paints a balanced and thorough portrait of the American dream juxtaposed with tragedy and executed with power and skill.

Critic Consensus: O.J.: Made in America paints a balanced and thorough portrait of the American dream juxtaposed with tragedy and executed with power and skill.

O.J.: Made in America Photos

A look at the rise and fall of sports icon-turned-accused murderer O.J. Simpson. This riveting documentary examines Simpson's 1995 trial for the killings of his ex-wife and Ron Goldman through the lens of the history of race relations in Los Angeles.

News & Interviews for O.J.: Made in America

View All O.J.: Made in America News

Critic Reviews for O.J.: Made in America

O.J.: Made in America is an extraordinary achievement in that not only does it provide a definitive overview of O.J.'s life - warts and all - but it offers new insights into events that have been picked over repeatedly over the past 20+ years.

Made for the cable sports channel ESPN, OJ: Made in America is a remarkable piece of work, rich in detail and nuance.

ESPN's ongoing 5-part, 10-hour O. J.: Made In America documentary series at first brush had the air of redundancy. Instead it's anything but.

Extraordinary on so many levels, O.J.: Made In America transcends its stated subjects and themes. It's a withering critique of self-creation, culture making, and idolatry that speaks to everyone, regardless of race.

It can blow your mind, this thorough series, as it digs deeper and deeper.

The reward will be insights into sports and celebrity, fame and sexual status, and of course, and especially, race.

A scorching and important dissertation, one that shows this American tragedy to be just another thread woven between stars and stripes and blood.

O.J.: Made in America puts the entire American value system on trial, forcing us to ask the difficult questions about what kind of society creates the environment for such a violent crime to occur while justice remains only as a nebulous ideal.

It is well worth the 7.5 hour watch time, even if you are only tangentially interested in OJ the man.

It will stand alongside the similarly epic Hoop Dreams as a documentary that, with sport as its ostensible subject, also serves as an examination of race in America, and of fame's perverse and distorting effects.

At seven and a half hours and split into five parts... Edelman's O.J.: Made in America is tremendous.

Not only is this the best O.J documentary by some distance, it is also one of the best documentaries you're likely to see this year.

Audience Reviews for O.J.: Made in America

A must-see eight-hour documentary that probes into an American crime and the cultural and social causes that made this shocking case possible. Full review on filmotrope. com

Spellbinding during every one of its mammoth 467 minutes, Ezra Edelman's five-part documentary is the definitive journalistic examination on the nexus of sports, media, race, privilege and celebrity that was the O.J. Simpson murder trial. It's also one of the greatest documentaries I have ever seen. This is a monumental artistic achievement that seamlessly blends many different story threads to present a psychological, relevant, and compelling case as to how this notable flashpoint in race relations was inevitable. Consider the eight hours a searing and engrossing psychological study of one of the twentieth century's most infamous cultural icons. The first part introduces us to O.J. the sports hero and you too may be surprised just how charming the man is, which along with his naked ambition allowed him to crossover into a primarily white business world. It's important to know the full picture of O.J., the natural star, the narcissistic showman, the jealous and cruel monster trading on his sense of entitlement and the adoration of others. Part two follows O.J.'s grievous relationship with Nicole Brown and includes haunting audio clips of her frantic domestic abuse 911 calls, which were often downplayed by an appeasing and star-struck police force. As O.J.'s career soars he shuns larger responsibility to the black community, which is routinely rattled by shocking police brutality and a sense of institutional injustice, best typified with the controversial Rodney King acquittals. Part three begins with the 1994 murders of Nicole Brown and Ronald Goldman, goes into the Bronco chase, and then O.J.'s assembly of his Dream Team of lawyers. Part four is devoted entirely to the criminal trial and part five the aftermath, including O.J.'s arrogant attempts to live business as usual after becoming a pariah to millions. Edelman assembles an impressive coalition of interview subjects with startling personal revelations and sometimes shocking admissions. They all masterfully come together along with the narrative threads of the systemic history of Los Angeles police corruption and abuses, the public's insatiable appetite for celebrity and its shamefully easy tendency to forgive the famous and horrible, and racial identity to form a complex, interwoven, and mesmerizing larger picture that feels like its own multi-media academic textbook with full annotations. It feels like a five course meal. This is the kind of powerful and ruminating documentary filmmaking that illuminates our understanding of the past and our greater connections to the wider world. O.J.: Made in America flies by effortlessly, packed with rich detail and archival footage, and serves as a terrific compliment to the brilliantly entertaining FX miniseries. This is a towering achievement in documentary film and rightfully earns the title of best movie of 2016. Nate's Grade: A

Edelman recognizes that to explain the outcome of the trial one must understand both O.J. Simpson and the racial history of the United States. Both are dissected in shocking detail. As exhaustive as this examination is, 7 1/2 hours somehow doesn't seem like enough. Regardless, this should be required viewing in all high schools.

Worth the endless hours to see front to end. This documentary goes beyond Simpson to talk about issues or race that continue to plague us to this day. A fascinating ride.

O.J.: Made in America Quotes