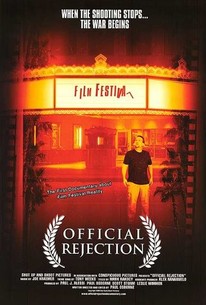 Independent filmmaker Paul Osborne proves why getting your feature completed is the easiest part of the battle by highlighting the difficulty of getting the finished product accepted into a film festival. Ask any independent filmmaker and they'll tell you that getting their movie completed was one of the hardest tasks they've ever accomplished. Little do most realize that this is merely the beginning, and that over the following months and years they will rack up a growing pile of film festival rejection letters while breaking the bank attempting to cover submission fees. In many ways, the fight to get your film placed in a major festival is more grueling than the production of the film itself. In this eye opening documentary, Osborne offers a crash course in the politics and pitfalls of life on the festival circuit so that aspiring entrees won't be caught off guard.

Can a little documentary about the less popular film festivals find a patron to give it the chance to find an audience?

There are no featured audience reviews yet. Click the link below to see what others say about Official Rejection!