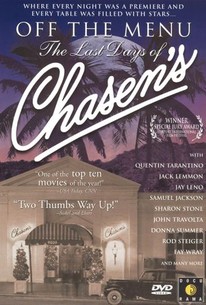 For fifty years, Chasen's restaurant and bar was the gathering place for Hollywood's elite, U.S. presidents and royalty. Famed for its paneled ambiance, world-class chili and its legendary Hobo Steak, it was where the rich and powerful were free to orchestrate complex deals, hash out conflicts or simply relax in understated elegance. In 1996, after nearly a decade of slow business due in part to increased diet consciousness, and also to the appearance of newer, trendier eateries, Chasen announced that it would close. Many of Tinseltown's brightest lights past and present appeared for the gala send-off which is chronicled in this documentary feast. In addition to featuring plenty of star-gazing, it also features poignant reminiscences from Chasen's staff, many of whom have worked there for decades.

Critic Reviews for Off the Menu: The Last Days of Chasen's

Hollywood ain't what it used to be.

Audience Reviews for Off the Menu: The Last Days of Chasen's

There are no featured audience reviews yet. Click the link below to see what others say about Off the Menu: The Last Days of Chasen's!

Off the Menu: The Last Days of Chasen's Quotes