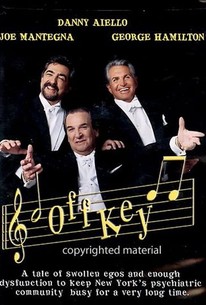 Three famous vocalists find their lives don't harmonize well off-stage in this farcical comedy. Armand Dupres (George Hamilton), Ricardo Palacios (Joe Mantegna), and Fabrizio Bernini (Danny Aiello) are three well-respected opera singers who have risen to superstardom thanks to a successful series of recordings and performances as a trio. However, after a disastrous concert in Mexico City, the three singers (all possessing king-sized egos) split up the act and refuse to talk to one another. A few years later, Palacios' career has taken a nosedive, and he's willing to set aside his differences and put the group back together. However, that's before he discovers that Dupres is engaged to marry his rebellious daughter Carmen (Ariadna Gil), and that his ex-wife has married Bernini. Can Palacios stop the wedding between Dupres and Carmen, win back his wife from Bernini, and still get the trio back on the road?

Critic Reviews for Off Key

There are no critic reviews yet for Off Key. Keep checking Rotten Tomatoes for updates!

There are no featured reviews for Off Key at this time.