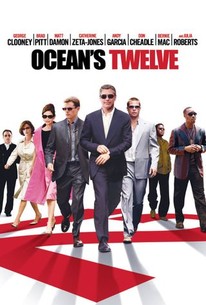 Critics Consensus: While some have found the latest star-studded heist flick to be a fun, glossy star vehicle, others declare it's lazy, self-satisfied and illogical.

Critics Consensus: While some have found the latest star-studded heist flick to be a fun, glossy star vehicle, others declare it's lazy, self-satisfied and illogical.

Critic Consensus: While some have found the latest star-studded heist flick to be a fun, glossy star vehicle, others declare it's lazy, self-satisfied and illogical.

After pulling off the heist of their lives, Danny Ocean and his pals unexpectedly find themselves back in harness in this sequel to 2001's blockbuster hit Ocean's Eleven. After robbing a cool $160 million from the Bellaggio Hotel Casino and winning back his former wife, Tess (Julia Roberts), from Bellagio owner Terry Benedict (Andy Garcia), Danny Ocean (George Clooney) is living quietly on the lam in Connecticut when he's unexpectedly approached by Benedict. It seems Benedict has tracked down Danny and the ten men who helped him pull off the seemingly impossible robbery, and Benedict offers them a proposal -- if they can repay the $160 million in two weeks, he won't have them killed. As it turns out, both Danny and his best friend, Rusty Ryan (Brad Pitt), haven't been doing so well in terms of money management and could use some cash, so they set out to plan a robbery to recover the loot, with the same crew helping out -- Linus Caldwell (Matt Damon), Frank Catton (Bernie Mac), Basher Tarr (Don Cheadle), Saul Bloom (Carl Reiner), Reuben Tishkoff (Elliott Gould), Livingston Dell (Eddie Jemison), Yen (Shaobo Qin), Virgil Malloy (Casey Affleck), and his brother Turk (Scott Caan). Danny and Rusty discover that an incredibly rare Fabergé egg is being displayed at a museum in Rome which would fetch the price they need, but they soon discover a notorious cat burglar, François Toulour (Vincent Cassel), is also after the egg, and it turns into a race to see who can claim it first. Adding to the intrigue is Isabel Lahiri (Catherine Zeta-Jones), a woman Rusty used to be involved with who is now a top agent with Interpol and is after both Toulour and Ocean's crew. Shot on location in both the United States and Europe, Ocean's Twelve was, like its precursor, directed by the stylish Steven Soderbergh, who also photographed the picture under his nom de lens, Peter Andrews. ~ Mark Deming, Rovi

Karl A. Brown
as Train Security #1

Ocean's Twelve is busier, messier and thinner than its predecessor, and while it looks like the cast is having a blast and a half, the studied hipness can get so pleased with itself it borders on the smug.

Hits a new low in condescending facetiousness, with no fewer than 15 performers of varying talents, tongues firmly in cheeks, undercutting all the genre's action conventions while camping up a storm on two continents.

It does the hard work of being a light, smartly turned-out amusement, the sort of thing that's becoming more and more rare on the movie landscape these days.

Some of the bits are hysterical, but others fall flat.

In this sprawling oglefest, such things as 'narrative' and 'story' are remote little abstractions indeed.

The whole thing is a piffle of fluff or a fluff of piffle. About halfway through you'll get an incredible hunger to see a movie.

There is a general convoluted feel about this installment. There are too many additional characters battling for space amid the narrative's over-complicated backstory.

An amiable sequel that doesnt really add much to the original, but does manage to have a feel-good nature and charm to it.

A merry referendum on movie stardom and sequel-making.

a great inside joke film

A top-rate cast makes up for the thin plot.

A self-indulgent lark if ever there was one. Lucky for us Steven Soderbergh is at the helm.

Ocean's Twelve makes a fair attempt in developing some complexity in its story, even though the shaky direction and unnecessary plot points will make you think otherwise. Clooney, Pitt, Damon, Roberts, new addition Zeta-Jones and cast continue with their shtick but not enough to hide the blemishes that weigh down the film. 3/5

Bringing back this star studded cast for one more round may seem like a good idea before the writing stages of this film began, but honestly, it just retreads everything that happened during the first film, while trying too hard to top the dialogue and clever plot points. In the end, this film kind of falls flat on it's face, because everything just falls into place far too easily. Everything falls apart in the beginning when Terry Benedict, whom they robbed in the first film wants his money back, for no reason, because he clearly states that his insurance already paid it back to him. They find a way to get the money back, which seems too easy, and obviously it is, because they can't accomplish it. This film has no idea whether it wants to be believable or not. Halfway through I started getting bored and I really didn't care if these guys got placed in jail or succeeded. "Ocean's Twelve" had too much going for it, for what it actually is.

[img]http://images.rottentomatoes.com/images/user/icons/icon14.gif[/img] Fans of the first film are bound to find something in this movie. It has its flaws including a lack of logic and a flimsy plot. But I enjoyed it because of the likable cast and decent one liners.

Nay sayers don't dislike the actual movie which is in many ways was just as stylish, hilarious and directed as the first but they seem to be infuriated at the self indulgent nature of the whole ordeal. Which makes me scratch my head, who gives a shit? What is this, some sort of political emotional debate on the principals of franchises in film making? Get out. Oceans Twelve is an incredibly, fun, working sequel but it's important to stress that it's not so much an elaborate heist film as it is a mosaic of comedic character driven epilogues. As smug as it is loosely strung together at times it all eventually comes together and I have to give Nolfi credit for not creating another formulaic heist film about bringing a team together to do "one big job", rather, bringing in this larger than life "Nightfox" character and Europol love interest Lahiri to really shake things up giving the entire plot a sort of unpremeditated fluidity. I can see how it's lazy, as the audience is finally clued into the events that took place between gaps without so much as a hint that they took place and in the end, these big reveals just feel cheap. It's hardly perfect but entertaining as hell. The only thing I don't get is how did Matt Damon's character have no idea what was going on when he was shown pulling the egg from the train?