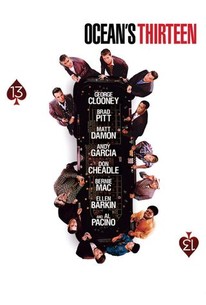 Critics Consensus: Ocean's Thirteen reverts to the formula of the first installment, and the result is another slick and entertaining heist film.

Critics Consensus: Ocean's Thirteen reverts to the formula of the first installment, and the result is another slick and entertaining heist film.

Critic Consensus: Ocean's Thirteen reverts to the formula of the first installment, and the result is another slick and entertaining heist film.

Cinema icon Al Pacino joins a powerhouse cast headed by of George Clooney, Brad Pitt, Matt Damon, Andy Garcia, Don Cheadle, Bernie Mac, and series newcomer Ellen Barkin for this, the third installment of director Steven Soderbergh's popular series of glitzy crime comedies. The only hotelier in Las Vegas who can claim that each and every one of his establishments has earned the Royal Review Board's Five Diamond Award, Willy Bank (Pacino) has made more than his share of enemies during his impressive ascent. While most of Bank's adversaries amount to little more than the occasional nuisance, however, this powerful player is about to find out that picking your enemies in Las Vegas can be a true gamble. In betraying Reuben Tishkoff (Elliott Gould), Bank has finally crossed the one man who could bring his entire empire crumbling to the ground -- Danny Ocean (Clooney). Now Reuben is in critical condition, and Ocean is determined to strike back at the man who nearly murdered his mentor. Bank may have taken down one of the original Ocean's Eleven, but his efforts only managed to unite the remaining ten closer than ever before. As the opening of Bank's newest casino draws near, Danny and the crew set into motion a bold plan to humiliate the cocksure casino owner and forever tarnish his spotless reputation. It won't be easy, but if Ocean and his team can get their elaborate plan together in time for the opening of The Bank, they just might be able to deliver some serious Las Vegas justice. ~ Jason Buchanan, Rovi

David Paymer
as The V.U.P.

Oprah Winfrey
as Herself

Bernie Yuman
as Himself

Michael S. Meldman
as Himself

When a movie keeps you this entertained without insulting your intelligence, it's hard to complain.

It's a great looking movie.

Plausibility is the first casualty in Ocean's Thirteen but it's unlikely anybody is going to care.

Flat, abstruse, predictable and unable to raise your pulse rate higher than a blip on an EKG.

You get what you came for, namely the usual suspects breezily hamming it up and a lot of forgettable banter going down incredibly easily.

Fantastically smug, empty picture, which comes complete with a nasty-tasting dab of misogyny.

The cinematic equivalent of flogging a dead horse, and a pale echo and imitation of the first, highly enjoyable entrant to the series back in 2001.

A chance to watch this skillful coterie of actors get together once again and do their thing (and do it well).

Now there's just self-fondling fizz -- no, not even that, just a kind of quasi-Zen petulance palmed off as 'cool'

A pastry of a movie, airy, insubstantial, and meant to fill in the gaps between heartier meals.

These actors have the characters they play down pat, and as long as they come up with some reason to pull off a heist, I'll be watching.

Steven Soderbergh reverts back to the witty and suave layout that made the original such a success. Even though it doesn't match with its first installment, Ocean's Thirteen is actually a boost from the second installment. The film's able to capture some of its original magic and, along with an interesting premise, is able to be an entertaining entry in this heist trilogy. 4/5

This is the third installment of the Ocean's heists. Better than the second movie, but not as good as the first. Reuben is tricked out of his fortune. The guys get together to regain his property by doing over Al Pacino's new casino. All the best characters are back. My fave scene is the last one in the airport.

A ruthless hotel owner cheats Reuben out of his share of the property and so the gang decide to extract retribution by ruining him and taking everything he's got. The Ocean's franchise, although better than the horribly self-indulgent original rat pack film, has never quite lived up to its potential. The first film started great but got rather mechanical and joyless for the second half. The second film started well but the second half was, well, garbage. Third time's the charm however, as the latest chapter is a big improvement over them both. The balance of comedy and action is maintained throughout the film at last, there's no Julia Roberts to be seen (yes!) and Pacino makes a much more charismatic villain than the inanimate Andy Garcia character. There's also plenty of comic asides from the Clooney/Pitt double act and Don Cheadle has finally tamed his still silly, but now bearable mockney accent. The plot twist is a little obvious, and a couple of the characters barely get a look in, but that's better than it being bloated and overlong. A stylish and sassy heist thriller, and the best of the series.