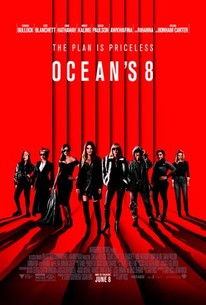 Critics Consensus: Ocean's 8 isn't quite as smooth as its predecessors, but still has enough cast chemistry and flair to lift the price of a ticket from filmgoers up for an undemanding caper.

Critics Consensus: Ocean's 8 isn't quite as smooth as its predecessors, but still has enough cast chemistry and flair to lift the price of a ticket from filmgoers up for an undemanding caper.

Critic Consensus: Ocean's 8 isn't quite as smooth as its predecessors, but still has enough cast chemistry and flair to lift the price of a ticket from filmgoers up for an undemanding caper.

Upon her release from prison, Debbie, the estranged sister of legendary conman Danny Ocean, puts together a team of unstoppable crooks to pull of the heist of the century. Their goal is New York City's annual Met Gala, and a necklace worth in excess of 150 million dollars.

There's a sweet satisfaction in watching as Ocean pulls it off.

If the ambition is to provide two hours of instantly forgettable, popcorn-munching escapism, it succeeds. But that is a miserably low hurdle to ask such a starry cast to clear...

As heists go, it's a moderately ingenious idea, and for the most part, the movie floats along amiably on the tide of its stars' charisma and the capable if uninspired direction of Ross, who also co-wrote the script with Olivia Milch.

A poorly directed and written blow-out. This cast deserved better.

Time's up on all-male heist shenanigans in Ocean's Eight, which proves that Y chromosomes in a glitzy, star-led ensemble caper are thoroughly surplus to requirements.

Anne Hathaway makes Daphne Kluger's laugh just one of many annoying things about her, which makes taking advantage of her fun in a movie that's not just a gender switch on heist flicks but a nifty takedown of celebrity culture and the fashion world.

Steers ahead on charm and glamour, proving that an octet of women can do anything just as capable as an eleven-strong crew of men, if not more so

Director Gary Ross fundamentally lacks the Soderbergh snap that was on display in last year's Logan Lucky. But if you're just in it to look at some of the best actresses in the business pal around for a frothy summer treat, Ocean's 8 will do just fine.

Ocean's 8 goes pretty deep without ever seeming like it's anything but popcorn fare.

The devil is in the trying too hard. The other installments in the Ocean's franchise were a light mix of crime, glamour, and self-aware humor.

The glamor and swagger the ensemble cast brings to their roles is as memorable as any created by the Soderbergh crew.

"Ocean's 8", on far too many levels, really misses the mark.

Ocean's Eight is a sad and lackluster attempt to revive the Ocean's franchise. After getting out of prison, Debbie Ocean (Danny's sister) puts together a crew to pull off an extravagant jewelry heist. The cast is pretty impressive (Sandra Bullock, Cate Blanchett, Anne Hathaway, Helena Bonham Carter), but they don't have any chemistry. And there's no fun. The writers makes a huge mistake right off the bat by killing Danny Ocean off screen and having his death loom over the film. And the cameos from the previous Ocean's films are rather weak. Additionally, there's nothing all that clever or exciting about the heist itself. Mediocre at best, Ocean's Eight lacks the style and attitude that made Steven Soderbergh's trilogy so successful.

Derivative, predictable and mostly unfunny (the dialogue is awful), this mediocre spin-off seems like written by someone who has never seen a heist movie in their life, unable to come up with any decent twist to make it worth it and being saved only by the amusing heist itself, which is fun.

The Ocean's movies, with the exception of the too-cool-for-school 12, have glided by on their charm, style, and a knack for having fun with cool characters and satisfying twists and turns. After 2007's rebounding Ocean's 13, it looked like the franchise was going back to dormancy, and then writer/director Gary Ross (The Hunger Games) resuscitated it with an all-female team, following the exploits of recently paroled Debbie Ocean (Sandra Bullock). Like her (recently deceased?!) older brother, Debbie has a big score in mind, the New York Met Gala, but more specifically a $150 million diamond necklace to be worn by self-involved acting starlet, Daphne Kluger (Anne Hathaway). Debbie gathers a team of specialists and, with the help of he best friend Lou (Cate Blanchett), the assembled eight schemes to get rich off the neck of Ms. Kluger. Like its predecessors, this movie glides on by thanks to fun characters to root for and a fun heist that packs enough setups, payoffs, and reversals. The heist formula demands a protracted setup but this gives way to a bevy of payoffs, when done correctly, and even more payoffs when complications must be dealt with in a rapid time. Each of the ladies get a significant part of the heist, though not all of them have the same level of memorable involvement in the movie itself. Ocean's Eight is a slick crime fantasy given a feminine twist, dipping into gaga fashions, killer jewelry, and celebrity worship. Bullock is a strong lead but it's Blanchett that won my heart, so confidant in her wardrobe of striking men's wear. Hathaway is a cut-up as a flaky actress needing constant validation. Part of the allure of the movie, and the heist itself, are the high-end clothes and accessories. Its prime escapism for the target audience to "ooo" and "ahhh," as my theater did. Ross follows the house style of Steven Soderbergh closely with lots of tracking shots, zooms, and a consistent sense of movement. The pacing is swift and thankfully there's a significant resolution after the heist that still finds time for even more payoffs. It's not quite on par with the original, but I'd declare Ocean's Eight the best of the sequels. It's fizzy fun, but what happens if there are three more of them? Nate's Grade: B

Regardless of the concept, I've always been intrigued every time a new heist movie makes it to the big screen. The sheer notion of watching a group of people flawlessly pull off something that most people would be crazy to attempt is quite entertaining for many reasons. Ocean's 8 is the latest film of its kind to hit theatres and with the weight of the previous trilogy on its shoulders, there was a high bar to meet. I'm a huge fan of the previous remake of Ocean's Eleven and while neither of the sequels quite match the quality of it, I was hoping Ocean's 8 would steer this franchise in a new direction. While I did enjoy watching this movie, for the most part, I did find myself pretty disappointed by it as a whole. I can't quite recommend this movie as a great film, but if you're a fan of the franchise, here's why you may find some enjoyment in its latest addition. Ocean's 8 follows the sister of Danny Ocean (George Clooney from the previous films) in Debbie Ocean, as she is released from prison and has plotted to rob the Met Gala in New York City. The plan is to steal a necklace that's worth over 150 million dollars, so naturally, she finds a group of women who are very interested in helping out. All having their quirks, they each become a necessity in accomplishing this task. Quite honestly, aside from the first film, this was probably my favorite heist sequence when looking back at the franchise, but if that's all the movie has to offer, then a lot will be left to be desired. A slow build up is fine if your climax pays off in a big way and for that alone, I found a lot of enjoyment from the movie as a whole. The very meticulous plan makes for an engaging climax and I was sucked into the movie until the very end. That being said, the first act of the movie nearly put me to sleep. This movie takes a very long time to peak your interest. Yes, there are a few interesting characters and some humorous moments will keep you interested, but I didn't find those elements to be enough. I found myself breathing a huge sigh of relief when the actual heist began because the movie didn't seem to have a pulse until that point. Luckily, the dull moments were held together by some likable actresses. From Sandra Bullock to Cate Blanchett, Anne Hathaway to Sarah Paulson, and even Rihanna to Mindy Kaling, everyone had their moment to shine here and I was having a blast watching these characters interact with one another. Sadly, those moments are few and far between. These actresses give their all with what they're given, but the script (aside from the plotting of the climax itself) just felt a little generic. A group of women gets together to do a heist and the circumstances are very much the same as the first film in the franchise. Nothing new was brought to the table, which was the one thing I was hoping for with this movie. Fans of the franchise may have some fun with the movie when it truly kicks into high gear, as I surely did, but the overall movie is frankly average. In particular, I found some of the unique editing choices to be slightly cheesy and I'm not sure if the movie's style worked all that much. The pacing is off in many places and it seems as though music is used throughout the first act to liven up a scene and prevent it from being boring. For all of these reasons and more, I can't quite recommend this movie to many viewers, but if you enjoy watching a good heist, that portion of this film is worth the price of admission in my opinion. While it's not something you have to rush out and see at the cinema, Ocean's 8 is worth renting.