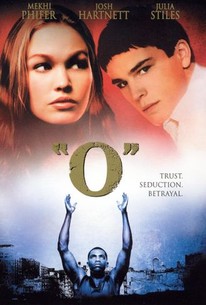 Critics Consensus: Though well-intentioned and serious in its exploration of teen violence, O is an uneven experiment that doesn't quite succeed.

Critics Consensus: Though well-intentioned and serious in its exploration of teen violence, O is an uneven experiment that doesn't quite succeed.

Critic Consensus: Though well-intentioned and serious in its exploration of teen violence, O is an uneven experiment that doesn't quite succeed.

Deep in the American South, NBA hopeful Odin James is the only black student at an elite private school. Playing point guard, Odin is a basketball scout's dream, possessing the talent to go straight from high school to the pros. Odin not only enjoys widespread popularity with the students, he is dating the beautiful Desi Brable, daughter of Dean Brable. Odin's best friend, Hugo Goulding, is a starting forward on the basketball team and the son of Coach Duke Goulding. Hugo is bitterly envious of Odin and the attention he receives from the coach and everyone else. Placed in the role of Odin's confidante, Hugo is, in reality, seeking to destroy his friend. Striking at the very core of Odin's soul, Hugo convinces him that Desi is having an affair with another member of the basketball team, Michael Casio. As the basketball season comes to a dramatic finish, conflict among the friends escalates into irrevocable tragedy when Hugo executes a plan prompting Odin to throw away all he cares about most.

Ken French
as Scout No. 1

Brush Up On Your Shakespeare With Our List Of The Bard’s Best Films
RTIndie: Stephen Frears Talks "The Queen" and Oscars; Almodovar And Cruz To Re-Team; Slamdance Lineup Set
Bosworth and Bloom to Brave the Depression Together

This arty melodrama is not likely to make teenage America get down with Shakespeare.

This transferral of the tragedy of the Moor to a contempo American high school is something that never should have gone further than a class assignment to see if it could be made to work.

Credit, none the less, to the film-makers' game, unpatronising approach, and to Phifer and Stiles as compelling innocents.

Perhaps overaware of its solemn literary inheritance, it tiptoes around sex and race, and, in turning Shakespeare's grown-ups into Dawson's Creek teens, jettisons much of the original's grandeur.

In the end, the Shakespearean ideas collapse on film because of the youthful callowness of the characters.

On your already groaning Shakespeare for Teens video shelf, stack this one above 10 Things I Hate About You ... and quite a bit below Romeo + Juliet.

The presence of old lags Martin Sheen and John Heard just beggars belief. What were they thinking?

It's highly enjoyable and well acted, with the Iago figure better motivated than in the original play, no single line of which has been retained except for the odd echo.

Helmer Nelson has fashioned a clever premise, helped along by a smart ensemble that manages to highlight Shakespeare's work without parodying it--no small accomplishment.

Hartnett never allows him to become a hissable villain, keeping Hugo shy of our sympathies, yet his every move is utterly believable.

Long on the Shelf, O is well directed and decently acted, but its narrative, while more or less faithful to Shakespeare, tried to do too much, pushing the characters and their emotions to unreasonable and unconvincing extremes.

Leave it to Hollywood to make a bold, challenging film for teens (and adults) only to let it collect dust on a shelf as proposed release dates were set, then scratched, many times over.

As I watched this movie I remembered that I had seen it before, I hate it when that happens.

Nothing comes between two people's love, like one person's jealously.

Actually a really great translation that didn't make a mockery of Shakespeare's work. Josh Harnett played a great Iago. It's interesting that this left more of a lasting impression on me that reading the play. Seeing all these things happen (especially when making the characters younger) really allows you to see the true sense of the meaning tragedy.