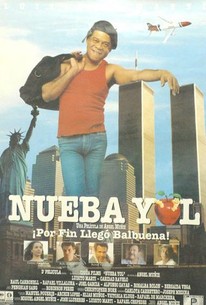 This dramatic chronicle of an immigrant's struggle to make a new life in New York City was a smash hit in its country of origin, the Dominican Republic. Amiable, big-hearted Balbuena, grieving over the recent demise of his much loved wife, decides he needs a change and so listens to the exciting pie-in-the-sky talk of his buddy Fellito who suggest that Balbuena leave the island and move to Nueba Yol (Dominican slang for the Big Apple). The widower goes up and stays with his cousin's family. Instead of finding a better life there he finds himself surrounded by grayness, uncaring bustle and society's grime. The prospect of easy money Fellito raved about is non existent for an illegal alien such as himself. Instead he finds only the most menial, lowest paying jobs available to him. Balbuena finally meets a nice woman, but ironically, she is planning to return to the Dominican Republic. ~ Sandra Brennan, Rovi

This low- budget but impressive film by Angel Muniz transforms itself into something more serious: a love story about the perils and heartaches of being a stranger in a strange and hostile land.

There are no featured reviews for Nueba Yol at this time.