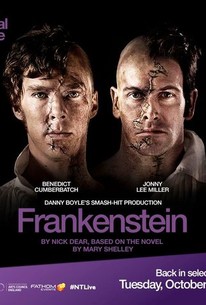 Fathom Events, BY Experience and National Theatre Live present a special encore of Frankenstein, in a one-night cinema event on Tuesday, October 25. Directed by Academy Award (R)-winner Danny Boyle, this thrilling production features Olivier Award winning performance from Jonny Lee Miller as Victor Frankenstein and Benedict Cumberbatch as his Creature. The production was a sell-out hit at the National Theatre in 2011, and has since become an international sensation. Childlike in his innocence but grotesque in form, Frankenstein's bewildered Creature is cast out into a hostile universe by his horror-struck maker in this deeply disturbing classic gothic tale.

There are no critic reviews yet for NT Live: Frankenstein 2016 Encore. Keep checking Rotten Tomatoes for updates!

There are no featured audience reviews yet. Click the link below to see what others say about NT Live: Frankenstein 2016 Encore!