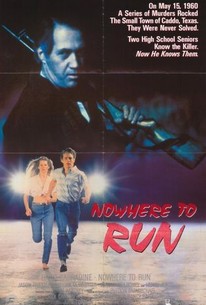 This grim tale is based upon actual events and chronicles the coming-of-age of two high-school seniors living in gritty Caddo, Texas in 1960. The teens lose their innocence when they become involved in the corruption and seediness that exists about their town after its leading citizen, the town judge and the town sheriff begin working on the latter's re-election campaign. The sheriff's challenger is desperate to win and so engineers the release of a dangerous convicted killer, whose actions he plans to blame upon the sheriff by making it look as if the incumbent accepted a bribe for the crook's early release. No one comes out clean in the end as the crook begins a vengeful killing spree and the corruption of both the judge and the sheriff are exposed.

Nick Shields
as Clyde
View All

Critic Reviews for Nowhere to Run

There are no critic reviews yet for Nowhere to Run. Keep checking Rotten Tomatoes for updates!

There are no featured reviews for Nowhere to Run at this time.