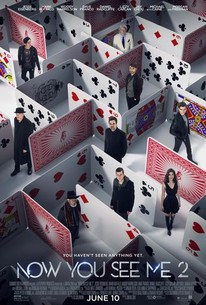 Critics Consensus: Now You See Me 2 packs in even more twists and turns than its predecessor, but in the end, it has even less hiding up its sleeve.

Critics Consensus: Now You See Me 2 packs in even more twists and turns than its predecessor, but in the end, it has even less hiding up its sleeve.

Critic Consensus: Now You See Me 2 packs in even more twists and turns than its predecessor, but in the end, it has even less hiding up its sleeve.

Now You See Me 2 Videos

Now You See Me 2 Photos

THE FOUR HORSEMEN (Jesse Eisenberg, Woody Harrelson, Dave Franco, Lizzy Caplan) return for a second mind-bending adventure, elevating the limits of stage illusion to new heights and taking them around the globe. One year after outwitting the FBI and winning the public's adulation with their Robin Hood-style magic spectacles, the illusionists resurface for a comeback performance in hopes of exposing the unethical practices of a tech magnate. The man behind their vanishing act is none other than WALTER MABRY (Daniel Radcliffe), a tech prodigy who threatens the Horsemen into pulling off their most impossible heist yet. Their only hope is to perform one last unprecedented stunt to clear their names and reveal the mastermind behind it all.

Karl McMillan
as Prison Guard 2 (US)

Michael Walters
as Prison Guard (US)

Michael Cooke
as Jack Stooge 1A

Luis A. Rosado
as Casino Dancer

John Cooke
as Jack Stooge 1B

Michael McKenzie
as Jack Stooge 2B

Greg McKenzie
as Jack Stooge 2A

News & Interviews for Now You See Me 2

View All Now You See Me 2 News

Critic Reviews for Now You See Me 2

Unfortunately the sleight-of-hand thrill of live magic becomes an unconvincing sledgehammer on the screen: layer after layer of trickery and rushing about lead to exhaustion.

What makes the film unravel is its sheer tricksiness. Everyone is conning everyone else. Carpets are pulled from beneath the feet so often that no stability is left for anyone.

The best attitude to Now You See Me 2 is simply to go nowhere near it.

Both predictable and confounding.

A disappointment so pervasive that it leaves heads shaking at the end credits.

I forgave the first film for its faults because one way or another it entertained me. This one did not.

The story hardly matters; as the lazy title suggests, we're just here to have a good time, and director Jon M. Chu knows how to make two hours of your life disappear.

Fun without form and stylish without substance, NYSM2 is more of the same without taking any steps forward or backwards.

It all feels more like a rehash of that first film. You can almost see a checklist of all the stuff that worked in the first film trying to be duplicated, but it just doesn't have the same freshness the second time.

Director John M. Chu's film is a blur of CGI trickery that bears zero weight because it's impossible for ticket holders to suspend their disbelief without sacrificing their intelligence for two hours.

Audience Reviews for Now You See Me 2

The original "Now You See Me" had a riveting cat-and-mouse mystery plot going in. Aside from some cool visual effects and a delightfully villainous turn from one D-Rad, this sequel lacks a real story - one that doesn't talk down to the audience who already knows things that the characters don't. My greatest pet peeve is the half-assed feminist agenda. Lizzy Caplan is awesome, but in an effort to make Lula more than the redheaded eye candy Isla Fisher played in the prequel, the filmmakers settled for lightweight feminist rhetoric. Instead of the on-the-nose comeback of Lula petulantly calling Dylan out for being patronizing, couldn't they just SHOW her being a badass on a motorcycle? Couldn't they even just show ANYTHING from her pop-up magic show? It's all just lip service to the "strong female sidekick."

An interesting plot but lacks the uniqueness and excitement as it's predecessor!

If you liked the original, this sequel is every bit as fun.

Now You See Me 2 Quotes