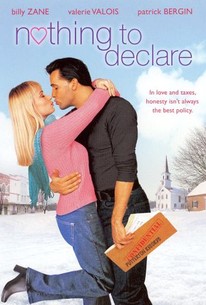 A quaint small town that hasn't paid taxes since World War II draws the attention of an ambitious tax inspector in this comedy starring Billy Zane and Patrick Bergin. Putterton possesses all the charm of your typical small town without any of the irritations of modern city living: The crime rate is low, the cost of living is minimal, and everyone knows their neighbors by name. Everyone in Putterton is proud that their little corner of the world has retained its old world ambiance, but when beautiful tax inspector Caroline Deville comes to town the atmosphere quickly turns tense. No one in Putterton has paid a penny in taxes since 1945, and despite his best efforts there's nothing that George Putter (Zane) can do to bury this dirty little secret. Just as Deville begins auditing at will and the town teeters on the verge of bankruptcy, however, help arrives in the form of Consumer City President Vernon Fry (Bergion). Consumer City is a giant discount chain with stores all across the country, and Fry is willing to rescue Putterton from financial ruin if the residents will just allow him to open a store in their quiet little burg. The only problem with this solution is that the presence of a garish Consumer City store in town would most certainly detract from the old fashioned atmosphere that that has come to define Putterton. While George and Caroline may have their fair share of differences, the one thing they can both agree on is that Putterton shouldn't bow to Fry and his corporate Goliath. Perhaps if they could just find a way to work together, these two unlikely allies can ensure that Putterton doesn't become yet another indistinctive stretch of strip malls and fast food joints.

Critic Reviews for Nothing to Declare

There are no critic reviews yet for Nothing to Declare. Keep checking Rotten Tomatoes for updates!

There are no featured reviews for Nothing to Declare at this time.

Nothing to Declare Quotes