Nothing But the Night (The Devil's Undead) (The Resurrection Syndicate) (1972) 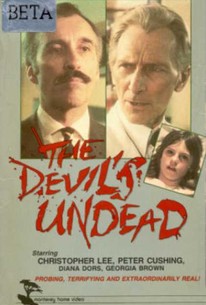 More widely seen in Britain as Nothing but the Night, this atmospheric chiller -- based on the novel Children of the Night by John Blackburn -- stars the ubiquitous Christopher Lee and Peter Cushing as a Scotland Yard inspector and a forensics expert sent to investigate a series of mysterious deaths among the elderly caretakers of a Scottish orphanage. Their probing uncovers a diabolical plot perpetrated by members of a Satanic cult, involving the use of an experimental serum which contains the genetic memories of its departed members. The caretakers have been injecting the serum into their young charges in order to use their bodies as healthy vessels for the Satanists' return, and the resulting possession transforms them into sadistic murderers. Although Christopher Lee acted as co-producer on both this film and the superb mystical classic The Wicker Man, it bears little resemblance to the latter, playing more like a Hammer-style variant on the American-made Brotherhood of Satan, released the previous year. Also known as The Resurrection Syndicate. ~ Cavett Binion, Rovi

John Robinson (I)
as Lord Fawnlee

Nice little thriller that manages to keep the twist hidden right to the end.

Nothing But the Night (The Devil's Undead) (The Resurrection Syndicate) Quotes