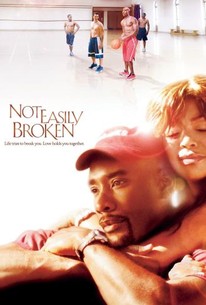 Critics Consensus: Though well-intentioned, Not Easily Broken is bogged down by melodramatic plotting and stereotypical characters.

Critics Consensus: Though well-intentioned, Not Easily Broken is bogged down by melodramatic plotting and stereotypical characters.

Critic Consensus: Though well-intentioned, Not Easily Broken is bogged down by melodramatic plotting and stereotypical characters.

A couple's strength and faith are tested after the wife is injured in a car crash and husband becomes attracted to another woman.

Garry G.
as Curtis
View All

News & Interviews for Not Easily Broken

View All Not Easily Broken News

Critic Reviews for Not Easily Broken

That's a reasonable message, but it might feel more resonant if the script were a little fairer to both sexes.

It has all the philosophical depth of a greetings card message but it's underscored with a nasty little edge of misogyny.

What should be easily broken is a large china vase over the head of everyone involved in this profoundly creepy, yucky, and chillingly reactionary relationship drama.

Laughter through tears is director Bill Duke's M.O., and he hits the bull's-eye of that modest target.

[It] has the saving grace of a lively sense of humor that certainly helps the spiritual medicine go down.

The overwrought drama, cliched characters and stale story lines undermine the wholesome message and make the movie seem longer than its 99 minutes.

The always immaculate, passionate and soulful Jenifer Lewis -- she could read the words in a phone book and make you feel it. The Hollywood veteran nearly saves the film.

This is glossy, forgettable fare more at home as a TV matinée.

It is unspeakably naff, unintentionally funny and unapologetically Christian. Judged on its own terms, it's a resounding success. But for non-believers it will likely prove a living purgatory.

Not Easily Broken is 99 long minutes worth of sobbing and hand wringing, with little insight and even less humour. Deadly stuff.

This is sermonising, not drama, and I suspect I won't be alone in finding it obnoxiously misogynistic.

Audience Reviews for Not Easily Broken

A little over-the-top at times, but it had a good message.

A little preachy and cheesy at times but it's actually a decent film for the most part. Good performances by Chestnut and Henson. Kevin Hart was entertaining but kind of stupid. With a better director and better writing it could have been a good film.

a paint by numbers only using a trowel instead of a brush, this film has mostly cardboard throwaway charactors and a message that you couldn't miss with both eyes closed. Said message, all wrapped up in a nice religious bow, seems to be that the only true relationship can be found by submitting to the procreational urges of your man (in other words, here's a film for all you religous right - feminism be damned - sit down, shut up, dumb down, feed your man dinner, give him what he needs in the sack, and bear him children - it's your duty and the only path to happiness - what drivel). The acting here is solid by the males, but very uneven, especially by the female lead - although she is given a Herculean task considering the script. Loose ends abound as well as superflous charactors (the luke warm IQ friend is a head scratcher), and set scenes that seem to come from out of nowhere (hey, I know, I'll head down to the basketball gym, because I just know I'll find the bitter alchololic who won't let his son be on my little league team). In a final, almost self admission, the script writer virtually writes off the physical therapist in a totally unbelievable scene where she, while still grieving the recent loss of her son, gets consoled by the male lead (who has "feelings" for her) and then all of a sudden turns all lusty on him - only for him to turn away and be all noble (since he's just now decided to return to his wife - you gotta be kidding!!!!). The writer has taken a strong and one of his more fleshed out charactors, and then had her turn totally out of charactor - only to finally bury and forget about her (after all, she's just a single woman and doesn't fit into the church marriage theme), as she forgives his "I can't do this" refusal with a simple "I know" - holy!!!!, if you "know" why did you make a move on him in the first place!!! AAAAAARGH!.

I saw this multi - dramatic motion picture and was emotionally moved as well as spiritually enchanted with the outcome of how this couple watched their trust and devotion in the vows of their marriage gets challenged to the max to the brink of collapse. See this, it is so vividly real....yet believable.