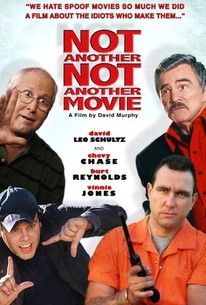 A struggling Hollywood movie studio attempts to produce the ultimate spoof movie, only to find that inspiration is in short supply in this comedy starring Chevy Chase, Burt Reynolds, and Vinnie Jones. When Max Storm (Chase) learns that Sunshine Studios is about to go bankrupt, he realizes that a single hit might have the power to make them profitable again. Desperate, Max recruits his troublemaking brother Lester (Michael Madsen), an ex-con-turned-producer (Jones), a hack director (Reynolds) and a harebrained screenwriter (David Leo Shultz) to turn out the ultimate cash-generating spoof movie. But in order to shoot a movie you've got to have a screenplay, and unfortunately for Sunshine Studios their head writer can barely string a single sentence together.

There are no critic reviews yet for Not Another Not Another Movie. Keep checking Rotten Tomatoes for updates!

There are no featured audience reviews yet. Click the link below to see what others say about Not Another Not Another Movie!