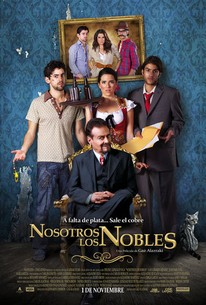 When successful construction mogul Herman Noble accidentally stumbles onto his children's credit card statements, he discovers they are spending money beyond control. His oldest son Javier, neglects the family business in exchange of his own ridiculous business ideas. His daughter Barbara gets engaged to a 40 year-old gigolo just to spike her father, Herman, and his youngest son Charlie was expelled from college after having sex with the teacher. Herman realizes his children are spoiled beyond redemption and decides to teach them a lesson, before its too late.(c) Pantalion

Cheli Godines
as Secretary at Cantina

Alejandro Reza
as Executive at Cantina

The performances are genuine and the narrative beats land solidly for a perfectly enjoyable feel-good dramedy.

Congratulations to the filmmakers, cast and everyone involved. [Full review in Spanish]

It's definitely not a cerebral film, but it's entertaining, simple and fun. [Full review in Spanish]

Even though its a little predictable, this uncomplicated story captures your atention from the beginning. [Full review in Spanish]

If you are looking for quality entertainment to pass some time with the family, this is the movie for you.

The most important part of the movie is that it can be funny without being snobby.

The great success -as we also saw in the appalling case of Roberto Girault's El Estudiante- is reserved for movies with moral.

There are no featured audience reviews yet. Click the link below to see what others say about Nosotros los Nobles!