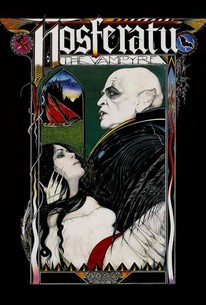 Critics Consensus: Stunning visuals from Werner Herzog and an intense portrayal of the famed bloodsucker from Klaus Kinski make this remake of Nosferatu a horror classic in its own right.

Critics Consensus: Stunning visuals from Werner Herzog and an intense portrayal of the famed bloodsucker from Klaus Kinski make this remake of Nosferatu a horror classic in its own right.

Critic Consensus: Stunning visuals from Werner Herzog and an intense portrayal of the famed bloodsucker from Klaus Kinski make this remake of Nosferatu a horror classic in its own right.

For Werner Herzog's 1979 remake of F.W. Murnau's classic 1922 silent horror-fest Nosferatu, star Klaus Kinski adopts the same makeup style used by Murnau's leading man Max Schreck. Yet in the Herzog version, the crucial difference is that Nosferatu becomes more and more decayed and desiccated as the film progresses. Essentially a retelling of Bram Stoker's Dracula, Nosferatu the Vampyre traces the blood-sucking progress of the count as he takes over a small German village, then attempts to spread his influence and activities to the rest of the world. All that prevents Dracula from continuing his demonic practices is the self-sacrifice of Lucy Harker, played by Isabelle Adjani. Director Werner Herzog used the story to parallel the rise of Nazism. The film was lensed in the Dutch towns of Delft and Scheiberg. Nosferatu the Vampyre was filmed in both an English and a German-speaking version; the latter runs 11 minutes longer. ~ Hal Erickson, Rovi

It's a curious mix: at times deliriously hammy, at others melancholy, contemplative and oddly beautiful.

Nosferatu the Vampyre comes across as the perfect conflation of everything that makes Werner Herzog Werner Herzog.

This is Herzog's journey to the heart of darkness, a film that specifically echoes his earlier offerings The Enigma of Kaspar Hauser and his South American odyssey Aguirre, Wrath of God.

Slowed down to a nightmare crawl, it's one of its director's most bizarre, resonant and fascinating films.

To say of someone that they were born to play a vampire is a strange compliment, but if you will compare the two versions of Nosferatu you might agree with me that only Kinski could have equaled or rivaled Max Schreck's performance.

It was really fun and creepy. Nice cinematography and atmosphere

Werner Herzog has created for himself and cinephiles in general a superb spectacle. [Full Review in Spanish]

More an homage than a remake, Nosferatu the Vampyre keeps the spirit of the original while simultaneously feeling decidedly Herzog-esque in the best kind of way.

Even the film's opening shots carry more meaning than just a creepy set-piece.

Not a single drop of blood is wasted here, and the film's elegantly tragic narrative features not one moment of wasted motion.

With a cold and solemn approach, Herzog makes an entrancing remake of Murnau's classic that is always beautiful to look at - much like a painting in motion - even though it is not scary, intense or even haunting, and the impression is that it was all about how to make it, not why.

Count Dracula: Death is not the worst. There are things more horrible than death. Nosferatu The Vampyre is my favorite of the Dracula adaptations I've seen thus far in my life. I've only seen a few of Herzog's non-documentary films and this is my favorite of the three. The other two being Bad Lieutenant and My Son, My Son, What Have Ye Done?. This has that distinct Herzog feel to it and I don't believe there was a better director to remake F.W. Murnau's silent classic, and there also wasn't anyone who could have portrayed Count Dracula as perfectly and terrifyingly as Klaus Kinski. This is one of the few horror films I've seen that I would describe as beautiful and it's no wonder coming from Herzog. The imagery and settings are absolutely gorgeous and atmospheric. Werner Herzog's Nosferatu should not be missed by any film or horror buff. This is an absolute classic and up there for one of the best vampire movies ever. I loved every second of it.

This film holds a special place in my heart because it was my first exposure to Werner Herzog and his films. I loved it when I first saw it, and that was just on a general level. Now that I am actually a fan of Herzog, and know things about him I can appreciate this even more. But, looking at it from just my original perspective, this is a very impressive, spellbinding, and masterful horror film. It's a remake of the Murnau classic, and it takes even more liberties with the original source material than Murnau did, but this is nevertheless a wonderful vampire movie. It's hands down one of the top 5 creepiest and unnerving films I've ever seen. The atmosphere, mood, and tone are hauntingly unnerving, and I've never been so filled with dread during an opening credits sequence like I am with this one. Kinski as Dracula is one of the scariest things ever. He's ugly, creepy, and, despite being more restrained than usual, is quite memorable as a chilling bloodsucker. Isabelle Adjani is the epitome of seductive, pale, gothic beauties, and she