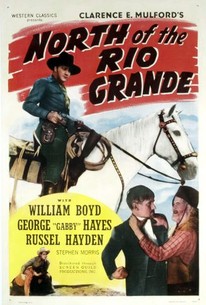 North of the Rio Grande Photos

Superior locations, above-average direction, better than usual lighting and competent acting were the ingredients that made producer Harry Sherman's Hopalong Cassidy vehicles perhaps the finest series of B-Westerns of its time. The fifth in the series, North of the Rio Grande introduced former grip Russell Hayden in the continuing role as young Lucky Jenkins and remains one of the best of the early entries. When Hopalong's brother Buddy is murdered during a train holdup, and it is pronounced an accidental death by the town's kangaroo court, Cassidy (William Boyd) and sidekick Windy (George Hayes) hasten back to Cottonwood Gulch. The former arrives disguised as Wild Bill Dynamite McGrew, a "notorious" train robber, while Windy obtains a job tickling the ivories at the local saloon. Hayes' stint as an Irish-accented bar pianist leads to one of the film's many delights, as veteran silent screen villain Walter Long leads the assembly in a sing-along of Wearing of the Green. Hopalong, meanwhile, robs a train to get the attention of the mysterious Lone Wolf, the master criminal responsible for his brother Buddy's death. Lone Wolf is soon revealed to be leading citizen Henry Stoneham (Stephen Morris alias Morris Ankrum), who in desperation kidnaps Windy and the train. With Hopalong, Lucky, and the posse in hot pursuit, the chase ends with Windy making the unwanted acquaintance of a painful-looking cactus. Saloon Belle Bernadene Hayes, the film's otherwise rather superfluous leading lady, is awarded the closing line: "Funny, all my life, men like Cassidy have been saying goodbye to me." Lee J. Cobb (billed simply as "Lee Cobb") made his screen debut as a railroad president, and Bernadene Hayes' sister Lorraine played Hopalong's grieving sister-in-law. With one "Hayden" and two "Hayes" already in the cast, producer Sherman renamed the actress Lorraine Randall for the occasion. North of the Rio Grande was filmed on locations at Sonora, California, with interiors done at the Grand National studios in Hollywood.

Critic Reviews for North of the Rio Grande

There are no critic reviews yet for North of the Rio Grande. Keep checking Rotten Tomatoes for updates!

There are no featured reviews for North of the Rio Grande at this time.

North of the Rio Grande Quotes