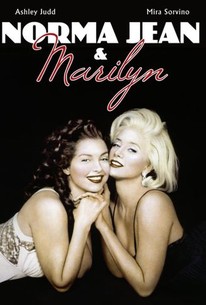 Originally made for cable television, this imaginative biopic chronicles the life of Marilyn Monroe (Mira Sorvino), including the years before she changed her name from Norma Jean Baker (Ashley Judd) and was transformed into the screen persona that made her a legendary sex symbol. The movie employs unconventional, dream-like storytelling techniques in which Marilyn and her former self, Norma Jean, frequently appear in scenes together, with Norma Jean often taunting Marilyn for not living up to her earlier aspirations. Many facets of Monroe's life are examined, including her childhood and adolescence when Norma Jean had to live with foster families because of her mother's psychological problems. In addition to referencing Monroe's work on such films as Gentlemen Prefer Blondes (1953), The Seven Year Itch (1955), and Some Like It Hot (1959), the movie explores her marriages to baseball great Joe DiMaggio (Peter Dobson) and famous playwright Arthur Miller (David Dukes), and her romances, including her purported relationship with U.S. President John F. Kennedy (Steven Culp). The film also offers a hard-hitting look at Monroe's struggle with drug- and alcohol-dependency. ~ Rovi

Jimm Giannini
as Reporter No. 1

Scott Menville
as `Misfits' A. D.

Warren Sweeney
as Reporter No. 2

There are no critic reviews yet for Norma Jean and Marilyn. Keep checking Rotten Tomatoes for updates!

HBO produced this portrayal of the creation of Marilyn Monroe. It contains T&A and shows us a much more psychologically broken (split personality) version of the icon. Of course the casting lends itself to this. Ashley Judd plays Norma Jean, though there are flashbacks to earlier events in her childhood with younger actresses too. Even when Norma Jean goes through the transformation to become Marilyn Monroe, played by Mira Sorvino, Judd as Norma Jean still appears to Marilyn to push her to success. We meet most of the men who were Norma Jean/Marilyn's lovers or husbands and this shows us the many phases that made up her life. This tv movie casts a wide net over the events that made Marilyn who she was, but through it all Judd is the strongest presence at its center.

Quite interesting story plot that centralizes on the life of the Hollywood starlet. Great cast- Ashley Judd, Mira Sorvino, and Josh Charles. Worthy!

Didn't think much of this, but Ashley is lovely.

The story was interesting and the acting was brilliant. Especially the decision to have two actresses play the role. I really need to see this again...