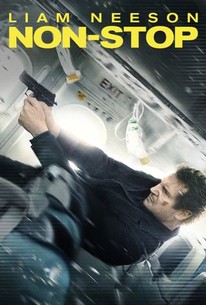 Critics Consensus: While Liam Neeson is undoubtedly an asset, Non-Stop wastes its cast -- not to mention its solid premise and tense setup -- on a poorly conceived story that hinges on a thoroughly unbelievable final act.

Critics Consensus: While Liam Neeson is undoubtedly an asset, Non-Stop wastes its cast -- not to mention its solid premise and tense setup -- on a poorly conceived story that hinges on a thoroughly unbelievable final act.

Critic Consensus: While Liam Neeson is undoubtedly an asset, Non-Stop wastes its cast -- not to mention its solid premise and tense setup -- on a poorly conceived story that hinges on a thoroughly unbelievable final act.

Global action star Liam Neeson stars in NON-STOP, a suspense thriller played out at 40,000 feet in the air. During a transatlantic flight from New York City to London, U.S. Air Marshal Bill Marks (Neeson) receives a series of cryptic text messages demanding that he instruct the government to transfer $150 million into an off-shore account. Until he secures the money, a passenger on his flight will be killed every 20 minutes. NON-STOP, which reunites Neeson with UNKNOWN director Jaume Collet-Serra and producer Joel Silver, co-stars Golden Globe Award winner Julianne Moore and will be released by Universal Pictures on February 28, 2014. The StudioCanal production is also produced by Andrew Rona and Steve Richards. (C) Universal

The filmmaking is playful without feeling jokey, the narrative stuffed with fun complications.

Neeson, who brings enormous conviction to these late-career action roles, moves his big body through confined spaces ... with so much power that you expect him to rip out the seats.

It's also cleverly plotted and efficiently put together by the Spanish director Jaume Collet-Serra.

There are a few too many implausibilities and loose ends and the interactions with passengers are hard to credit.

Anyone planning to see Non-Stop should probably just go see it. This is one of those near-perfect, peeled-onion, airplane-hijacking thrillers in which each removed layer brings you closer to a single, happy tear.

Non-Stop isn't a bad example of its type of film; merely an unexceptional one.

A glossy whodunit that feels like a familiar (and fun) Agatha Christie narrative thrust onto a plane, filled with moments you'll question later but offering a generous amount of engagement.

Non-Stop never soars but it's a fun way to spend 106 minutes.

A deliriously silly doomed-airline thriller that's all the right kinds of ridiculous.

All-in-all, this was a good popcorn flick.

It's a fun bit of escapism, as long as you don't think about it afterwards.

Offers enough pulpy pleasures to keep audiences engaged and invested during its breezy 106 minutes, but they're just as likely to leave it on the tarmac once the ride is over.

A highly entertaining action movie that overcomes its flaws (mainly an almost unbelievable last act) with a suspenseful whodunit, an awesome, badass Liam Neeson and an impressively dynamic direction that helps maintain a constant tension and claustrophobia.

Intense and very entertaining airplane thriller that perfectly uses its limited space for quite a built-up of suspense. The closer we get to an oddly over the top action finale, the more we're losing track of any signs of logic of coherence. Thankfully, before the film is spinning into unintentionally funny chaos, the road to that is pretty exciting.

What does this title even mean? seriously I know most action flicks have ridiculous names simply to look and sound cool (Rush Hour, Maximum Force, Sudden Death) but this is meaningless. I guess it means the action and suspense is...non-stop, good golly that's some good thinkin' right there, what's wrong with...Airplane...oh wait I see. Anyone else notice that some action flick titles are getting really obscure these days, especially Liam Neeson action flicks. I mean seriously...what the hell is 'Unknown' suppose to be? So anyway Neeson is a recovering alcoholic whose young daughter died from cancer years ago, oh and he also lost his job as a cop...wow. Now he's an air marshal flying from New York to London which he doesn't really enjoy doing. What I initially found amusing was all the stereotypical passengers which are automatically racially profiled, the main target naturally being a Muslim (or at least someone of Middle Eastern descent), a black youth and just a bunch of random looking white people. But as we all know the terror suspect (yeah its that kind of flick as if you didn't know) could be anyone. A plane load of civvies, one on the edge air marshal, one love interest and one obligatory cute little girl. Then all hell breaks loose as Marks (Neeson) starts getting threat texts on his special air marshal smartphone thingy. The whole premise does seem quite ridiculous really, in reality if this happened I'm sure they wouldn't do anything and just land the plane. As they say in the film it would be hard and obvious eventually if someone did start murdering folk on a plane. What also bugged me was the attitude of the passengers on this flight. Marks starts to take control and needs people to cooperate with his instructions and everyone starts whining and bitching. Oh you can't do this, you don't have the right, who put you in charge?? Errmm...he's the fecking air marshal you cretins, he's basically a police officer on the plane, if this dude has reasons to do something then it would be advisable to follow his instructions for your own safety, sheesh! I'll be honest, this film had me, I genuinely was unsure who would turn out to be the bad guy. You know to suspect everybody of course, in flicks like this we all know half the time its the heroes partner or person he made friends with on the plane or the nerdy guy that comes across as useless and weak (ahem). But yeah I went through everyone thinking ah its gotta be him or her, but I was totally wrong so kudos there. I also didn't know that flights have a special closed wi-fi network or secure line for air marshals, unless of course that's a movie thing. I know wi-fi on international flights isn't really a proper thing yet. Again I'll be honest, this film did have me on the edge of my seat for the most part. The plot isn't overly original but the slow building tension as things are amped up and Marks is seen as the actual threat does work nicely. I felt quite uneasy during the run time, I found myself really wanting Neeson's character to just explain from the start what has happened. The fact that everything has been recorded on his special smartphone thingy (all the serious threats) puts him in the clear so no worries. It frustrates you how Marks seems to keep everything shrouded in mystery and eventually you do begin to side with the annoying passengers. The stupid thing is towards the end he has to tell everyone what's going on anyway to get them on his side and for their help. Naturally everyone does end up believing him so you kinda wonder...why didn't you just do that in the first place Marks! What I didn't get is the fact that the villains plot only seems to work out by pure coincidence, the threat is someone will die every 20 minutes until this amount of money is transferred into this account blah blah blah. Yet this only happens because the villain is counting on Neeson's character to actually kill someone in his game of tricks...for the most part. So when things seemed to go awry it turns out it was all in this villains master plan anyway...pfft! So if Marks had just ignored it and fallen asleep...would anything had happened?? The villain was depending on Marks and his current unhinged state, without that...I dunno was there a plan B? Its nice to see Neeson actually play a character who isn't just some uber awesome badass with a halo on his bonce. Despite the fact he is actually an uber awesome badass he is also a bit of an A-hole too. I mean seriously Marks, you're stampeding around this international flight and scaring the bejesus outta everyone. OK sure the passengers are a typically annoying bunch of moaners but dude...a tad of diplomacy surely, you're not walking your beat here. So in the end everything turns out OK...what you didn't think it would? Are you suggesting they might leave an open ending so Mr. Neeson can take to the skies again in 'Non-Stop 2: Please Stop' and maybe even 'Non-Stop 3: Why Isn't This Stopping'?? Nope everything gets sorted out and wrapped up in a nice pretty little bow...phew! Can't deny the film was a solid blast of entertainment though, no doubting that, don't watch before flying though...well that goes without saying surely.

An enjoyably intense thriller with an intriguing mystery and another commanding performance from Liam Neeson. It's just a shame that the ultimate reveal is quite ridiculous and the final third act ignores basic physics. But hey...what are you going to do?