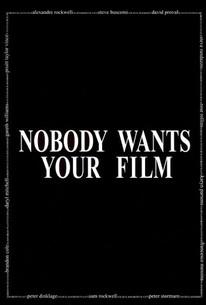 Director Peter Judson strings together a series of interviews and e-mails captured during the production of an independent feature film to tell this semi-fictionalized tale concerning the difficulties of getting distribution and the frustration, joy, banality, and passion of the filmmaking process. Interviews conducted with such independent film stalwarts as Steve Buscemi, Sam Rockwell, and Peter Dinklage - as well as conversations with such respected screen veterans as David Proval - offer an informative and absorbing glimpse into a side of the entertainment industry seldom seen by those not directly involved in the filmmaking process. In weighing the malaise of constant rejection against the importance of seeing a film through to completion, Judson offers both a cautionary tale of filmmaking and an abstract view of the process accompanied by surreal and often intoxicating imagery.

Critic Reviews for Nobody Wants Your Film

Nobody Wants Your Film is both the cautionary tale implied by its title and an inspiring note from the indie underground.

There are no featured reviews for Nobody Wants Your Film at this time.

Nobody Wants Your Film Quotes