Nobody Speak: Trials of the Free Press2017 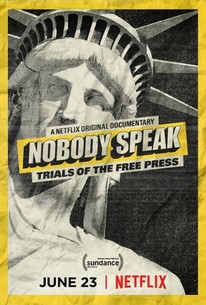 Critics Consensus: Nobody Speaks: The Trials of the Free Press persuasively -- and entertainingly -- outlines the troubling tensions threatening journalism in the internet era.

Critics Consensus: Nobody Speaks: The Trials of the Free Press persuasively -- and entertainingly -- outlines the troubling tensions threatening journalism in the internet era.

Critic Consensus: Nobody Speaks: The Trials of the Free Press persuasively -- and entertainingly -- outlines the troubling tensions threatening journalism in the internet era.

Nobody Speak: Trials of the Free Press Videos

Nobody Speak: Trials of the Free Press Photos

When the online tabloid Gawker posted a surreptitiously filmed sex tape of professional wrestler Hulk Hogan, it ignited a high stakes legal battle that pit privacy rights against the first amendment. The staggering verdict bankrupted Gawker and its founder Nick Denton, but also exposed a shadowy figure behind the scenes -- Silicon Valley venture capitalist Peter Thiel. Nine years earlier Gawker had outed Thiel on its site and the furious billionaire had been waiting for his chance to destroy them. The Florida trial happened against the backdrop of a contentious election. Thiel's battle with Gawker, along with Sheldon Adelson's secretive purchase of the Las Vegas Review-Journal and President Trump's treatment of journalists, portend a sinister trend threatening a free press and has brought to light a potential threat to democracy. Are the very wealthy thwarting the First Amendment to silence critics? In an age of extreme inequality, how vulnerable is a free press that has lost most of its traditional sources of income? Perhaps most frightening, what could a billionaire with the executive branch at his command do to those who have angered him?

News & Interviews for Nobody Speak: Trials of the Free Press

Okja, Glow Season 1, Paterson, and More on Netflix and Amazon Prime This Week
Transformers: The Last Knight Has Neither the Touch Nor the Power

View All Nobody Speak: Trials of the Free Press News

Critic Reviews for Nobody Speak: Trials of the Free Press

What the film offers is evidence of a pattern, the shadows of a disturbing trend that add up to a warning: If we, as a society, don't push back against the chipping away of the freedom of information, it's only going to get worse, until it eats us alive.

It has the feel of a late-night conversation at a college party, full of good ideas but lacking focus.

A film about the vital importance of speaking truth to power needn't be so concerned with dressing up its own frightful truths, but Nobody Speak still compels as an opening statement on journalism's dubious future.

Just because "Nobody Speak" has a timely message doesn't make it an ideal messenger.

A troubling foreshadowing of things to come if journalists are threatened, sidelined or attacked by powerful institutions and people more concerned with their own interests than what's best for the country or communities.

This documentary is an invigorating, disturbing portrait of the arrogance and sinister self-importance of rich people, bullying politicians and their battalions of lawyers.

A simple documentary that hits the right buttons to make us paranoid, even if it regards tabloids. [Full review in Spanish].

Objectivity and freedom of the press is one of the foundations on which our country was based, and its ability to be controlled by those with deep pockets and influential authority is flat out alarming.

Knappenberger falls short of greatness by falling victim to the distraction that is Donald Trump.

Watching Knappenberger's documentary will hopefully raise awareness about the state of jeopardy independent journalism is currently in and possibly prevent a situation like Gawker's from happening to another outlet.

What starts out as a standard documentary procedural ... soon becomes an exposé on how the rich and powerful in our country are attempting to silence the fourth estate.

As Nobody Speak spirals outward from the Gawker case to examine the broader cultural conflicts between journalists and the powerful, it loses some of its focus but none of its righteous indignation

Audience Reviews for Nobody Speak: Trials of the Free Press

Supporters of Donald Trump's autocratic rule will not like this documentary which spotlight's the current assault on the fourth estate.

Nobody Speak: Trials of the Free Press Quotes