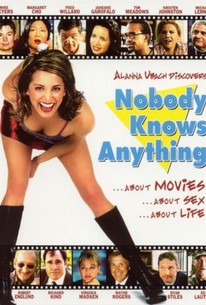 An aspiring filmmaker learns that success in Hollywood doesn't come as easy as she suspected as she attempts to discover the formula to success in this satirical comedy from director William Tannen. When the guidance of her helpful has-been uncle (Michael Lerner) fails to pave the way, Sarah Wilder (Alannah Ubach) must seek the advice of such Hollywood heavies as Mike Meyers, Ben Stiller, and Fred Willard -- only to discover that the old adage is true and Nobody Knows Anything about how to succeed in the cutthroat world of Los Angeles.

Critic Reviews for Nobody Knows Anything

There are no critic reviews yet for Nobody Knows Anything. Keep checking Rotten Tomatoes for updates!

Audience Reviews for Nobody Knows Anything

i hope Alanna Ubach dies in a fucking car crash. i want her to be driving a VW punch buggy and for it to collide at 72 mph with another punch buggy so her head will come through the tiny windshield. and i hope she's on the way to the beach so does that stupid move that girls do where they stick their feet out the window while the car is moving. that way her legs get cut into 20 pieces by the other VW's mirror and god i fucking hate everyone who had anything to do with this shit.

Nobody Knows Anything Quotes