No Room for Rockstars2012 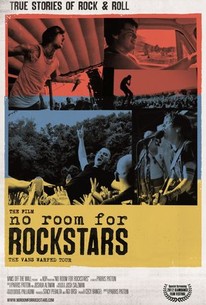 No Room for Rockstars Photos

With more than 300 hours of film shot during the 2010 tour, No Room For Rock Stars documents the true stories of modern era rock and roll from every possible angle. From the kids in the van playing parking lots to gain notice, to the veteran stage manager whose life was saved by the tour, to the musician who crosses over to mainstream success while on the road, No Room For Rock Stars is Cinema Vèritè story-telling at its finest. A historical retrospective or concert film this is not. -- (C) Official Site

Bring Me The Horizon

Critic Reviews for No Room for Rockstars

This is not your typical concert film. It's raw, gritty and gets to the heart of the tour of which Lyman is the centre.

Mostly an amorphous, fitfully engaging fan's document that doesn't locate much in the way of a dramatic throughline, but the behind-the-scenes access will be attractive enough for its core demographic even if few others.

A briskly-paced documentary that does what every good cinema verite-style film should: it illuminates its subject so that you are compelled, whether that subject is of natural interest to you or not.

a heartbreaking snapshot of how the music becomes bait for corporate interests to snatch up alienated youth, turning an entire culture into a profiteering scheme.

Audience Reviews for No Room for Rockstars

There are no featured audience reviews yet. Click the link below to see what others say about No Room for Rockstars!

No Room for Rockstars Quotes