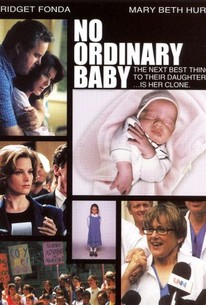 When their young daughter is killed in a tragic car accident, a devastated couple goes to extreme measures to bring love back into their lives in a heart-rending family drama starring Adam LeFevre, Valerie Mahaffey, Mary Beth Hurt, and Bridget Fonda. Chris (LeFevre) and Virginia Hytner (Mahaffey)'s once idyllic world has been shattered by the untimely death of their beloved daughter, and now, in order to let go of the past and find happiness once again, they choose to put their future in the hands of Dr. Amanda Gordon (Hurt) of the Center for Reproductive Medicine. Since Virginia is now over forty and the couple's chances of an uncomplicated pregnancy are slim, they have opted to attempt the unprecedented feat of cloning their deceased daughter. When a minor league reporter looking for a major league story (Fonda) transforms the Hytner's desperation into a sensationalistic headline, the firestorm of controversy that follows forces the couple and their doctor into the underground as it compromises the safety of their unborn child.

Critic Reviews for No Ordinary Baby

There are no critic reviews yet for No Ordinary Baby. Keep checking Rotten Tomatoes for updates!

Audience Reviews for No Ordinary Baby

When a couple lose their daughter in a tragic car accident, they take an opportunity to clone their daugther. A reporter follows their story. Emotional movie about a delicate topic.