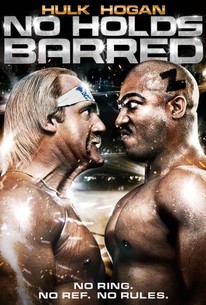 Hulk Hogan, in an inarguably appropriate casting choice, plays a professional wrestler in this action-packed drama. Rip (Hogan) is a grappling star who is approached by Brell (Kurt Fuller), the new head of the World Television Network. Brell wants Rip to wrestle on his network, but Rip insists on honoring his commitment to another outlet. Brell responds by launching a show called "Battle of the Tough Guys," in which the beefy regulars of a particularly rough drinking establishment fight each other on camera. Zeus (Tom "Tiny" Lister Jr.) soon emerges as the bad guy champion on this new show, and Brell uses Rip's friendship with his assistant Samantha (Joan Severance) to arrange a bout between Zeus and Rip. Rip is not at all interested until Zeus injures his brother and makes the fight a matter of personal pride. ~ Mark Deming, Rovi

Jesse Ventura
as Himself

Stan "The Lariat" Hansen
as Neanderthal

Critic Reviews for No Holds Barred

The movie never takes itself seriously and director Tom Wright (TV's "Beauty and the Beast") has fun with the wrestling montages. Hogan himself has an appealing screen presence -- like a gallant teddy bear who goes berserk every 10 minutes or so.

Maybe we should mention that the gruesome violence in the movie was enough to make this adult wince.

For months now, Dustin Hoffman and Robert De Niro have been sitting in their dens and nervously clutching their Oscars. They knew that an unprecedented challenge was looming... the arrival of Hulk Hogan in his first starring role in a movie.

The film is utterly lacking in the campy quality of the World Wrestling Federation telecasts.

As cartoonish as its star.

Hogan as The Ripper is a force of nature here, and he makes "No Holds Barred" in to a fun action cartoon.

Racist, misogynist, dumb, sadistic, lazy and tiresome, the film is about a big bout between a huge heroic white guy and a huge villainous black guy.

The final showdown between Rip and Zeus is overlong and full of uninspired wrestling stunts. The camera crews of the World Wrestling Federation do a much better job.

While wrestling fans surely will queue up to see their boy win the day, No Holds Barred is just a sweaty headlock of a film, with dreary, gory scenes and a bunch of slope-headed hokum to propel it.

Some may find the cartoonish violence excessive; the champion Tough Guy can't be anyone but a good guy, but that doesn't stop him from doling out to his enemies a very painful punishment.

Audience Reviews for No Holds Barred

terrible and classic at the same time

It was cool when I was Little

I liked WWF when I was a teenager since in this Hulk Hogan's debut role of the muscle-bound wrestling film. At the final wrestling battle, Hulk Hogan vs Tiny Lester are cool and really tough.