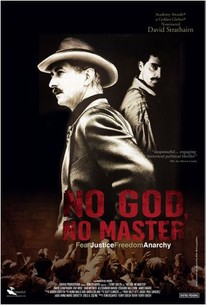 No God, No Master Photos

When a series of package bombs show up on the doorsteps of prominent politicians and businessmen in the summer of 1919, U.S. Bureau of Investigation Agent William Flynn (Strathairn) is assigned the task of finding those responsible. He becomes immersed in an investigation that uncovers an anarchist plot to destroy democracy. Based on true events of the 20's the film sets the stage for a timely drama with resoundingly similar parallels to the contemporary war on terrorism and the role government plays to defeat it. (C) Monterey Media

News & Interviews for No God, No Master

View All No God, No Master News

Critic Reviews for No God, No Master

No God, No Master has an authentic period feel. But Green is focused on so many historical figures and potential storylines that the film feels rushed and, at times, confusing.

A film that probably should have been called "No Ambien? No Problem!"

A series of issue-driven snapshots instead of something genuinely illuminating.

Green is both a capable filmmaker and a clear history buff.

The attention to detail is strong and it's hard not to think about De Palma's The Untouchables.

Nobody in No God, No Master actually utters the phrase "those who forget the past are condemned to repeat it," but that sentiment is the subtext of nearly every line of dialogue in this historical drama about the Palmer Raids.

Nobody in No God, No Master actually utters the phrase "those who forget the past are condemned to repeat it," but that sentiment is the subtext of nearly line of dialogue in this historical drama about the Palmer Raids.

Great history and plenty of bombs and explosions but lacking the glitz to be a great crime thriller.

"No God, No Master" is at its best when it sticks with Straithairn, who brings an added humanity to a role designed to celebrate the value of that very trait.

Although marred by a weak script and an obtrusive film score, this film is saved by its theme, namely the Palmer Raids of 1919 that was a precursor to the abuse of democratic rights happening right now.

Audience Reviews for No God, No Master

No God, No Master is the sort of film that clearly has a lot to say, a lot of history to convey, yet struggles to do so effectively in a self-contained film. It's a period piece of historical merit, certainly, but also one plagued by a sort of routine by-the-numbers filmmaking that makes it less compelling than it should have been. Set in the summer of 1919, the film looks at the events following a series of packaged bombs sent to prominent politicians, industry men, and bankers. The ensuing terror unleashes the overzealous attorney general, Alexander Palmer, who subsequently orders the arrest and deportation of thousands of immigrants, termed the Palmer raids. The film clearly sees a parallel to our current situation today, with civil liberties coming under assault in the wake of hysteria arising out of terror. Like the film's protagonist, Agent William Flynn, the film argues for a more restrained, cool-headed approach. Agreed, but I was hoping it would be conveyed in a dramatically compelling way. Too often with No God, No Master, we feel as if we are being both preached to and lectured at, with dialogue making a point to constantly underline the historical significance. It is a fine line, to be sure, yet I felt the film was too conservative in its approach, despite some generally good performances, especially by David Stratharian. Overall, the direction was competent, the performances serviceable, and the story interesting. Yet the execution was lackluster, making it a so-so film. 3/5 Stars

No God, No Master Quotes